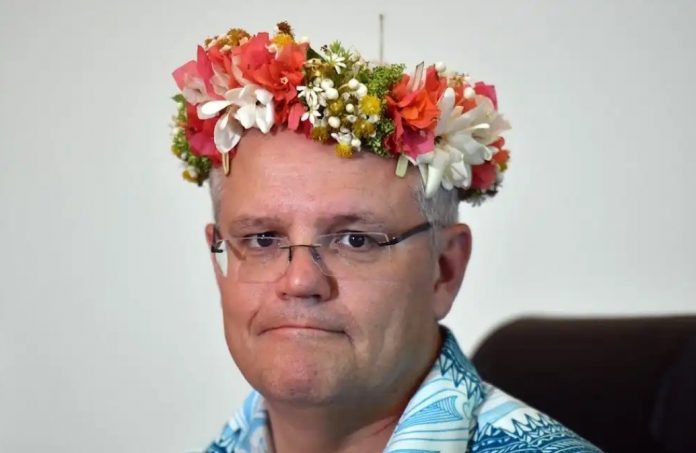 Speaking as Australia’s Acting Prime Minister McCormack was filmed by The Guardian News saying that Pacific Island Countries who are at the frontline of the impacts of climate change have no right to ask Australia to consider its current gas emission levels.

“Im a little bit annoyed when we have people in those sorts of countries pointing the finger at Australia and say we should be shutting down all our resources sector so that, you know, so they can continue to survive!”.

McCormack went on to say that Pacific Island countries will survive climate change because of the large aid assistance from Australia, and because workers from PICs “pick their fruit”.

“They’ll continue to survive because many of their workers come here and pick our fruit, pick our fruit grown with Australian enterprise.”

Asked for a comment Australian Prime Minister Scott Morrison made no apologies nor indicated any intention by the Australian Government to retract McCormacks remarks, which have been described by opposition leader as ‘ignorant’.

“These are ignorant comments from the Acting Prime Minister and he should know better”, said acting opposition leader Richard Marles.

Scott Morrison’s official response instead reiterates Australia’s aid assistance to the Pacific saying that they are partners who will always be there.

The Australian Prime Minister said that Australia discusses issues with the Pacific “just like any family,”.

“We come around the table we discuss all these things through. We talk them all through. And that’s what Australians have always done in the Pacific,” reads the statement by Scott Morrison.

“Part of the tension was in the manner and language used by Australia in driving their perspectives home,” said Tuilaepa.

“When Australia persistently reminded leaders of what it has provided for the Pacific – the inference was indeed unpleasant for the simple reason, the process was one of consultation towards an acceptable consensus,” added the Samoan Prime Minister.

The approach is reflected in the Australian Governments official response to McCormacks remarks:

“Australia has the deepest engagement and biggest commitment of any nation in the world in the Pacific;”

“We’ve always been there. We will always be there. And regardless of whatever issues we have to work through at the time, our Pacific family knows that Australia will always be for them”, reads the statement by Morrison.

The Australian Prime Minister’s confidence in the Pacific family knowing that “Australia will always be there” may need to be reassessed given the recent public responses by Pacific Island Leaders.

Fiji Prime Minister Frank Banimarama tweeted, “If this is the Australian Government’s idea of a “step up” in its relations with the Pacific, it’s certainly not a step forward. It’s a big step backwards.”

Sopoaga went further in relation to McCormacks comments. He threatened to pull his country from the Recognised Seasonal Workers Scheme (RSE) and called for the Australian High Commissioner to Tuvalu to explain the remarks of its leaders.

“I thought the Australian labour scheme was determined on mutual respect, that Australia was also benefiting,” said Mr Sopoaga. “We are not crawling below that. If that’s the view of the Government, then I would have no hesitation in pulling back the Tuvaluan people as from tomorrow.”

“Australia’s High Commissioner to Tuvalu would be summoned to explain the comments, and I also encourage the leaders of the other Pacific countries – including Kiribati, Samoa and Tonga – to do the same,” said Sopoaga.

Samoa’s Prime Minister says that Australia must open their eyes to the fact that climate change is now a global catastrophe.

“There is no such thing as a free lunch any more! Australia’s prolonged drought, forest fires, cyclones, flash flooding, increased acidification of the Great Barrier Reef and the consequential threat to their marine resources are well known to all Australians except those who have eyes but failed to see,” said Tuilaepa.

“To engage in climate change adaptation and mitigation projects in the islands is therefore an extension of Australia’s own security consideration similar to the goals of its own domestic climate change policies”.

“Science has stressed that in order to prevent sea level rise which will impact many low lying islands we must do much more or else the temperature rise could reach 3oC or more by 2100. This is disastrous for small island countries as well as the whole world. Planet earth is at a crisis and no country is safe from the devastating consequences of climate change,” added Tuilaepa.

Asked for a comment Australia’s Deputy High Commissioner to Samoa Amanda Jewell sent through Scott Morrison’s response above and referred Samoa Global News to an email address for further questions: media@dfat.gov.au. No acknowmedgement has been received on follow-up questions sent to this address.

The official communique from the Forum Leaders of the Pacific calls for urgent stepped up actions by all nations to commit to limiting temperature rise to 1.5oC by 2020 and ensure zero greenhouse gas emissions by 2050.