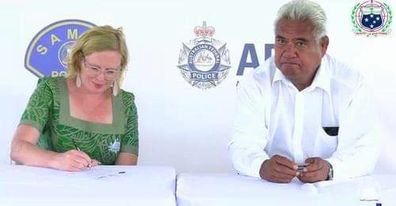 By: Joshua Lafoa’i
The mission of Samoa’s Police Service to capitalise on the digital evolution took a quantum leap yesterday thanks to partners from the Australian Federal Police (AFP) who donated a set of high tech equipment to SPS.
The Samoa/Australian partnership program has been behind more than $2million tala worth of projects and initiatives with the Samoa Police Service over the last two years. And this weeks donation is amongst the largest worth $500,000 tala.
“The new equipment could not have arrived at a better time, especially the speed guns, the tablets, the bikes for the patrol units, and the tech equipment to be used by the Samoa Police, especially in the time of increased police work around the country,” said Acting Police Commissioner Auapaau Logoitino Filipo.

The donation included two top of the line high powered drones, digital forensic surveillance equipment, tablets, speed guns and bikes. They were handed over at a ceremony held at the Fagalii traffic division earlier this week.

The drones are said to be able to fly at an altitude of 500 feet, with distanced of up to 15km, with a one hour flight time.

“This will most especially help with the rising amount of traffic incidents within the past month alone,” said Auapaau. “Samoa will continue to work closely with the Government of Australia and its people, to meet our common interest, to promote prosperity, peace and security within our country,” he added.
The Acting Police Commissioner thanked the Government of Australia and the Australian Federal Police.
The Acting Police Commissioner says the addition of drones, surveillance cameras, and mobile workstations will ensure that all police works are safer.

Superintendent Daniel Evans of the Australian Federal Police reaffirmed their committment to their partners across the Pacific region to combat transnational crime.

“Cyber crime is something that continues to attack us, drugs continue to come from overseas and by having strong networks and strong partnerships as we do with the Australian Federal Police and the Samoa Police, we are able to combat that. Not only here but abroad,” he said.