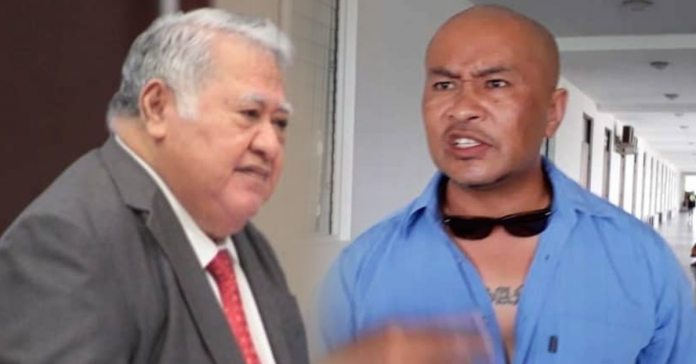 Speaking to Samoa Global News on condition of anonymity, a credible source from the village of Laulii says a man from Maagiagi married to a woman of their village (faiavā) was allegedly hired by Tala Pauga as a “hitman”.

Pauga became well known to the people of Samoa when he entered a community meeting in Brisbane last year and threw a pigs head towards Prime Minister Tuilaepa during a Samoa Airways promotional event. He was then convicted and fined in November last year for public nuisance.

At the time Pauga told Samoa Global News that his actions were on a “political level” towards the Samoa Prime Minister.

“It was my protest as a citizen of Australia,”

“I didn’t want to welcome the Prime Minister of Samoa into my country (Australia) where I pay tax”.

Pauga had said that, “the reason why I used dog food and pig’s head is because he (Tuilaepa) calls the people of my country pua’a elo, maile and all that – so I thought I would give it right back to him.”

He added, “I am actually proud of what I did and I told everyone that, as well as the other media who contacted me for a comment.”

Earlier this year when Pauga visited Samoa he was charged for making a false declaration on his arrival card. A charge described by his lawyer Josephine Sapolu as “the first time such a case under the Immigration Act had come before the Courts”.

Pauga was fined $2000 tala by District Court Judge Leota Raymond Schuster, and ordered to pay $200 towards police costs and $200 to the Immigration Office.

Yesterday afternoon the Samoa Police Service (SPS) issued a statement confirming that three male suspects have been charged for conspiracy to assassinate the Samoa Prime Minister and ongoing investigations included “other jurisdictions”.

According to the source, the third man arrested is the faiavā by the name of Taualai. The source names Tala Pauga as one of the conspirators who allegedly hired Taualai as the hitman, helped him source a gun and sent him payments via money transfer.

The alleged conspiracy had come to light when members of Laulii’s Village Council alerted the Samoa Police on Monday 13th August with details of the assassination plot.

The source says the swift action and response taken by the Laulii Village Council was based on substantial findings that Taualai was allegedly approached and offered money by the conspirators for the assasination of the Prime Minister.

He says witnesses from the village and Taualai himself provided the Samoa Police with information showing that the conspirators provided a weapon, a vehicle and payments allegedly received from Tala Pauga in Australia.

“There are receipts of payments received in amounts of $200, $400 and $500 tala. There are also messages on messenger showing that this is serious and very real”.

Relating to the alleged weapon the source said that a gun was picked up from Faleatiu but Taualai had gone back to the conspirators and said he was not happy with the gun because it was too big for him.

“So they said someone would come to pick up the gun that Taualai did not want to use; and when that person arrived, it was Lema’i,”

“That is why the police raided Lemai’s house and when they did, they found the car our village was looking for – the Honda CRV that was on the Observer;”

“That was the car Taualai and his wife had been driving around in,” he added.

According to the source, receipts of payments transferred from Australia showed that the funds had allegedly come from Tala Pauga.

“The funds are sent from Tala Pauga”.

When contacted for a comment Afioga i le Sa’o Faapito Leniu Vainiu Taliulu Teo of Laulii confirmed that Taualai and his wife were brought before the village at a special sitting of the Village Council held this morning.

“I will not comment on the details of the police investigation but the couple and other witnesses are now under the protection of our village,”

“Laulii continues to cooperate with the ongoing police investigation and part of that role is to protect this couple until the case is heard before the Courts,” added Leniu.

The Acting Police Commissioner was contacted for a comment but had not responded by the time of publication.

The press statement issued by SPS yesterday afternoon stated that “due to the seriousness of the case coupled with the fact that it is an ongoing investigation we will not and cannot provide any further details..”