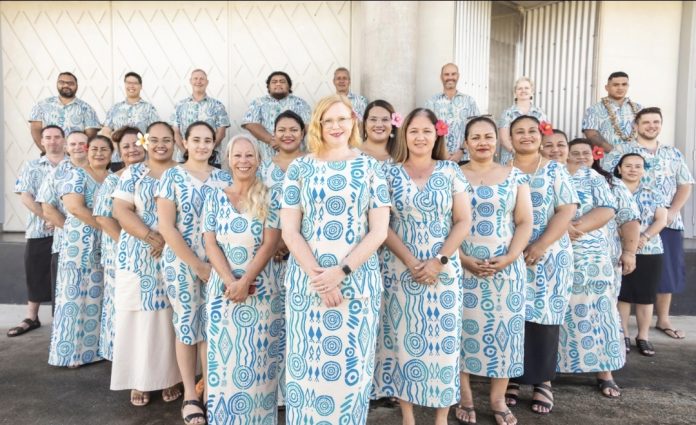 In celebration of Samoa’s 60th anniversary of Independence the Australian High Commission has launched a new uniform.

The design incorporates artwork from both Samoan artists, Lalovai Peseta and Nikki Mariner, of Manamea Art Studio, together with Queensland-based Elaine Chambers-Hegarty, an Indigenous Australian artist with cultural links to the Koa, Kuku Yalanji and Barada Barna peoples.

The final design was elei printed by Pacific Jewell.

“It tells a story of community connections, of coming together to support one another, as well as recognising the collective journeys we have taken, and the promise of what’s to come,” said Australian High Commissioner to Samoa, Her Excellency Emily Luck.  “It pays tribute to the ocean that binds us and honours the stewardship of the environment by the people of the Blue Pacific.”

“The Samoan motifs speak about our connection to the land and sea, our sources of life,” said Mr Peseta.

Nikki Mariner adds, “It also speaks about shelter and protection, and our sacred duty to protect these resources not just for ourselves, but for our future generations.

As described by Ms. Chambers-Hegarty, the Australian elements of the design represent community circles and places of gathering. The circles represent the communities of both Australia and Samoa, with the connecting lines signifying the strong and dynamic links of our partnership.

“We are humbled to have such talented artists collaborate on this beautiful design for our uniforms, capturing the spirit of the relationship between our two countries” said Ms. Luck. “We congratulate the Government of Samoa and its people on celebrating its 60th Independence, an incredible milestone.”