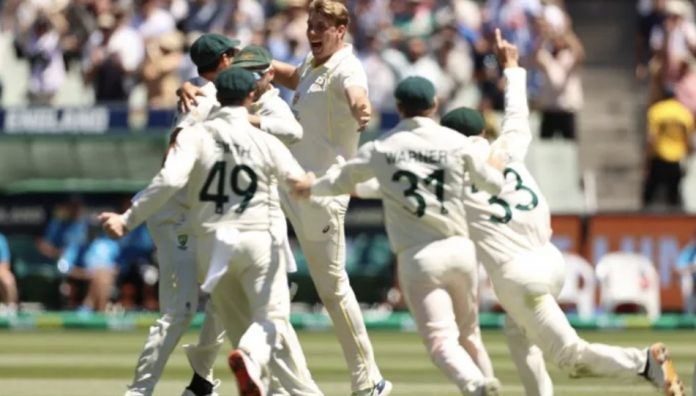 Australia has retained the Ashes on just the 12th day of the series, bowling England out for just 68 on day three of the Boxing Day Test at the MCG to take a 3-0 lead in the five-game series.

Debutant Scott Boland was the hero on the third morning, dismissing Joe Root, Jonny Bairstow, Mark Wood and Ollie Robinson to finish with the unbelievable figures of 6-7 from four overs in his second Test innings.

Making his debut even more impressive, Boland, just the fourth Indigenous Australian Test cricketer, was awarded player of the match and won the Johnny Mullagh Medal, named for the star of the 1868 Aboriginal team that toured the UK.

“My family would be very proud and I’m very proud to win this award,” the Gulidjan man said.

It powered Australia a remarkable win by an innings and 14 runs in the third Test, despite only scoring 267 runs in their one dig with the bat.

After Boland and Mitchell Starc took four wickets on a stunning second evening, England started day three trailing by 51 runs, but with their two most accomplished batters at the crease.

Root and Ben Stokes and played some impressive strokes early, but Australia did not have to wait long for the wicket-taking to resume, with Starc getting a ball to jag back sharply and clean bowl Stokes through the gate in the seventh over.

Bairstow was the next to go, Boland’s enjoyable debut continuing with a very tight LBW call upheld despite an English review — similar to Dawid Malan’s on the second evening.

He moved to 4-5 when he nicked off Root, England’s hopes of a fightback going with their captain, and Boland had his first Test five-wicket haul when Wood chipped a return catch straight back to him off his third ball.

That became six wickets when Robinson edged through to Marnus Labuschagne in the slips, but all-rounder Cameron Green had the pleasure of finishing off the win by clean bowling James Anderson in the next over.