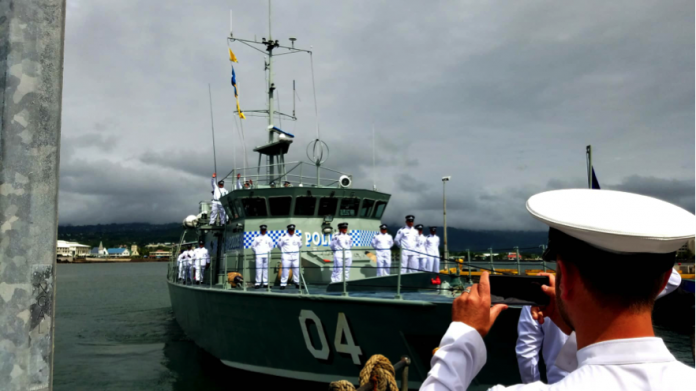 After more than 30 years of service, the Nafanua will be returning to Australia to be replaced by a new WST30M Guardian-class Patrol Boat, the Nafanua II, which will be larger, more capable, and have the capacity to support a mixed-gender crew. The Nafanua II is scheduled to be officially handed over to the Government of Samoa in Australia in August 2019 and is due to arrive in Samoa in October 2019.

The Guardian-class Patrol Boats are one of three components of the AUD 2 billion, three decade commitment to the Pacific, which also includes a region-wide aerial maritime surveillance capability, enhancements to regional coordination, sustainment and training support.

Pacific Maritime Security Program vessels are vital for maritime surveillance and the protection of fisheries resources in the Pacific region.

Ms Moriarty said that “Samoa and Australia have grown together through ongoing cooperation, jointly recognising the importance of maritime security in a region made up of large ocean states. We are all part of the ‘Blue Pacific’,”

“The Nafanua has been with the Independent State of Samoa since March 1988. She was gifted by the Australian Government through the original Pacific Patrol Boat Program, now known as the Pacific Maritime Security Program, which saw Australia gift vessels to Pacific Island countries between 1987 and 1997 – a 30 year commitment of AUD 2 billion,”

“Throughout these years, Australia has had the privilege of sharing the responsibilities and challenges of realising the Pacific’s vision for a region of peace, harmony, security, social inclusion and prosperity,”

“We look forward to maintaining a close dialogue with Samoa and neighbouring Pacific nations as we roll out future initiatives to step up our partnership with the region.” Ms Moriarty said.

Australia values the enduring and cooperative relationship with Samoa that extends across political, security, economic and people-to-people links.

Ms Moriarty ended by wishing the Nafanua I and her crew a very safe voyage to Australia, and highlighted another significant milestone for Samoa’s Maritime Police Service with the arrival of Nafanua II.

“I would like to make a special mention that when the new Nafanua II arrives, Samoa will be the first Pacific Island Country to have women posted to sea—a significant feat in paving the way for future women seafarers not only in Samoa, but the Pacific region—and very fitting as the vessel is named after a highly respected warrior goddess. A journey of a thousand miles begins with a single step. May Nafanua the warrior goddess guard you on your journey,” she concluded.