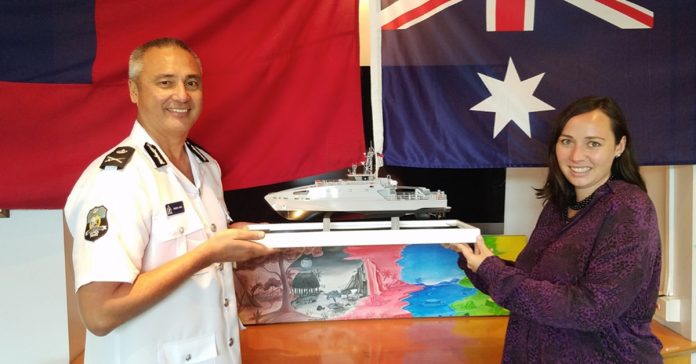 26 March, 2019. A model of Samoa’s newest Guardian-class Patrol Boat, Nafanua II, was presented to Samoa’s Commissioner of Police Fuiavailili Egon Keil at the annual Defence Cooperation Talks between Samoa and Australia. Ms Anna Koestenbaur, Assistant Director for Pacific and Maritime Security, presented the model on behalf of the Australian Department of Defence at the Australian High Commission on Monday 25 March 2019.

Under the Pacific Maritime Security Programme (formerly Pacific Patrol Boat Programme), Samoa is to receive Nafauna II, which has an estimated value of AUD15 million. The Nafanua II will replace the Nafanua I and will be bigger and a more capable vessel that will enhance Samoa’s capacity to secure its ocean resources and maritime domain.

“Since 1988, there has been meaningful and mutually beneficial engagement between the Samoa Police Maritime Wing and Australia’s Department of Defence,”

“The Australian Department of Defence supports various operations and maintenance of the current Nafanua I, including technical and operational support through Raoyal Australian Navy Maritime Surveillance Advisors.”

Nafanua I is currently being used by the Samoa Police Service for maritime surveillance, quarantine, search and rescue, transnational crime prevention, disaster relief, and medical evacuations. The Government of Samoa is also able to assist neighbouring Tokelau with medical evacuations and transportation, which will continue with Nafanua II.

Samoa will also be the first in the Pacific to have women posted to sea when the new Nafanua II arrives later this year.

The Pacific Maritime Security Programme is an AUD2 billion commitment to the region over the next 30 years and consist of three components: Pacific Patrol Boat replacement, integrated regional aerial surveillance, and efforts to strengthen regional coordination.