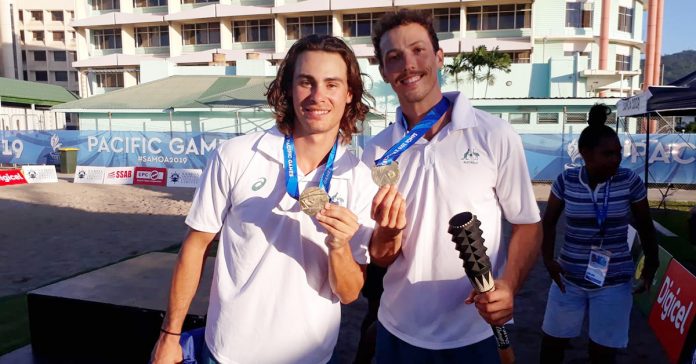 12 July 2019 Pacific Games Apia Samoa. Beach Volleyball gold medalists Marcus Ferguson and Tim Dickson of Australia have loved the Samoan hospitality and say they will be back to stay for longer.

It is the first time Marcus and Tim have ever visited Samoa and the Australians spoke highly of how the Samoan people have made them feel at home.

“The atmosphere is awesome here in Samoa and we believe it’s the people that makes the country,” said Ferguson.

“Your people are so sweet and lovely from the youngest person to the eldest men and women they have shown us nothing but respect and we’ve enjoyed every second being here.”

The duo beat Terau Ena and Jeremie Paraue of Tahiti in two straight sets 21-15, 15 -9 in the final while Semisi Funaki and Tio Fono Hema had to fight hard to beat American Samoa to secure the bronze.

Marcus Ferguson told Samoa Global News they had come into the Pacific Games tournament knowing how strong the teams would be.

“Our goal was to win gold but we knew were going to go up against some very strong teams from the Pacific. We tried our best and now that it has all come to an end, words cannot describe the feeling;.

“Wearing gold medals around our necks feels so surreal;

We’re just enjoying every moment of it, and just soaking it in one second at a time really.”

The Australian gold medaliats were flat mates and became close friends before they started to play.

“We get along very well and we know each other very well too;

“We’ve got a real brotherly connection so it was easy for us to play together.”

Asked what’s next the pair said they would like to try out the surfing sites in Samoa and try out the waves.

“We have a day off tomorrow so we will drive down to the South Coast because we were told that Samoa is the perfect country to catch a wave so we are looking forward to our day off tomorrow,” he said.

“It has been an amazing week and we will definitely be coming back to stay a bit longer.”