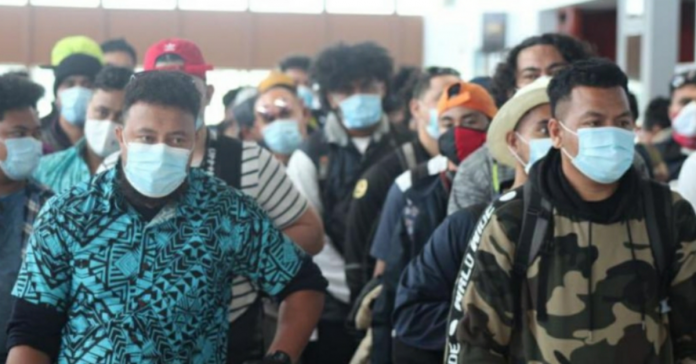 Auckland International Airport is the only endorsed departure point for all arrivals into Samoa.

Returning Samoans must travel to Auckland to transit home, and should take note of New Zealand’s compulsory transit window, requiring all repatriated passengers to leave Auckland within 24 hours of arrival.

Unless otherwise endorsed by Cabinet, there shall be no immediate direct flights to Samoa from the United States, Hawaii, Europe, Australia and other destinations.

Chairman of the National Emergency Operation Center (NEOC) Agafili Tomaimano Shem Leo says they have negotiated with Air New Zealand to try and align departure times for Cabinet-approved repatriation flights out of Auckland, to meet the 24 hour transit window.

In the meantime, four more repatriation flights have been approved by Cabinet, to depart Auckland between April and June this year.

The first flight scheduled for the 17th of April are for travelers from Hawaii, Canada, Alaska and Europe who will fly over from the US to New Zealand and then to Samoa.

The second flight on the 7th of May will bring in RSE workers from Australia and New Zealand. This flight is expected to include travelers from Asia and those who underwent medical treatment in India.

The 28th of May flight will also include returning RSE workers, and the 18th of June flight is for New Zealand and Australia based travellers.

The NEOC has issued new travel restrictions and pre-departure requirements for inbound travellers; and citizens wanting to return to home must note that all entries into Samoa are now being reviewed on a case by case basis.

ALL are advised to communicate directly with the Samoa Health Authorities 21 days before planned travel time via below email.

All must be in touch via email with the Samoa Ministry of Health authorities 21 days before scheduling travel.

Travellers who had tested positive for the COVID-19 virus have to meet several criteria for entry including a 6 month stand down period from the date of infection.

The Travel Advice is published in verbatim here.