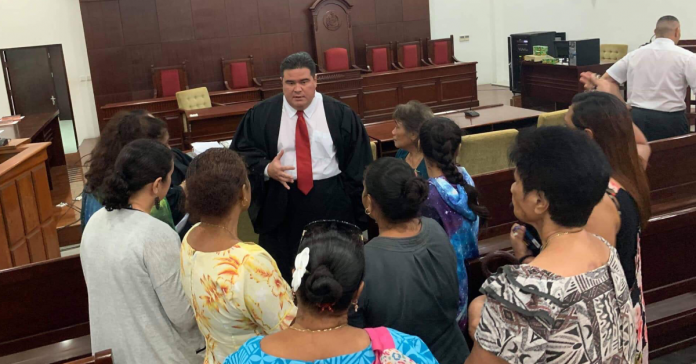 25 February, 2019 Samoa – Attorney General, Lemalu Hermann Retzlaff is the lead counsel for the trial of Kolani Junior Lam, the man behind the alleged murder of former CEO of UTOS, Sa’u Justina Sa’u.

The matter was set for hearing this morning however, defense counsel Leiataualesa Komisi Koria re-filed an application before Justice Tafaoimalo Leilani-Tuala Warren, for his client to have a judge-only trial, without a panel of assessors who are randomly selected from the public.

Defense counsel had filed this application before the Court last week Friday, and later withdrew it following discussions in Chamber.

Supporters and family members of Kolani and Justina waited in a packed court room this morning while legal counsels from both sides were called into Justice Tafaoimalo’s Chambers, where Leiataualesa Komisi re-submitted an application for a judge-only trial.

The family of Sa’u Justina were clearly disappointed about the delay in court proceedings, and swarmed the AG for answers following the adjournment.

Speaking to the media outside Court this morning, Attorney General Lemalu Hermann Retzlaff who is supported by Magele Leone Sua-Mailo, said that his prosecution team was ready to proceed today, and did not know why defense counsel had re-filed the application.

“They decided this morning to re-submit that application,” says Lemalu.

“They had withdrawn it on Friday so we were ready to proceed but they have formally re-filed it, so the Judge says she obviously will have to consider it.”

The Attorney General confirms that prosecution will oppose the application for the trial to be heard by the judge alone.

“I don’t know why they had decided to refile but he’s made a decision, and our job now is to try and respond to it”.

“We did ask for no more delays, so we have to now prepare our responses, and argue it tomorrow.

Justice Tafaoimalo adjourned the matter to tomorrow, Tuesday 26th of February for a hearing on the application regarding assessors.

Lam is charged with the murder with alternative charges of manslaughter, common assault in respect of his step-daughter, possession of narcotics and conspiracy to defeat the cause of justice.