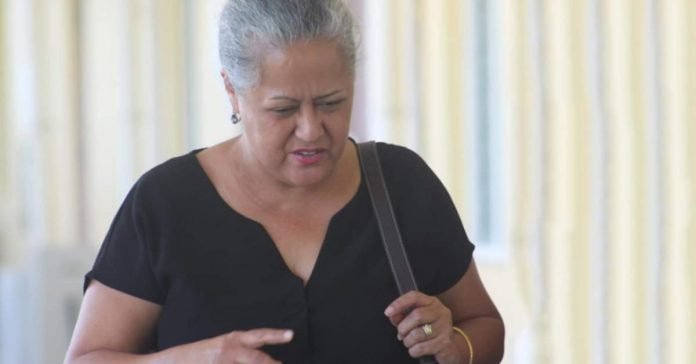 27 May 2021, Apia Samoa. The Attorney General of Samoa has applied to the Supreme Court to disqualify judges set to hear the appeal on the issue of the 6th seat for women in Parliament, saying her office has “substantive evidence that is questioning the appearance of impartiality and integrity of the Judiciary presiding over this matter”.

Savalenoa Mareva Betham-Annandale suggests His Honour Chief Justice Satiu Simativa Perese, “may be in contempt of Parliament” for walking with the Judiciary to the doors of Parliament House on Monday, and further suggests the Chief Justice is related to FAST leader Hon Fiame Naomi Mataafa.

In a Minute to the media issued earlier this week, Chief Justice Satiu confirmed the Court would set aside other matters, and deal with “the urgent constitutional issues which go to the fabric of the maintenance of Samoa’s rule of law”.

“Given the events of the last three days, the Court considers that its limited judicial resources should be used to hear the Appeal concerning women representation under Article 44 of the Constitution. This will provide for a definitive answer to this important constitutional issue”, stated the Chief Justice.

However in an urgent press release issued today, the Attorney General says the public should be notified that an application has been made to disqualify the Judges from sitting in the Court of Appeal, “given their potential conflicts of interest and potential favoritism,” according to the AG.

The decision has been appealed by the caretaker Government. Having lost an application for stay of execution, the caretaker Prime Minister says Parliament cannot convene and he and all the members of HRPP will not attend Parliament until the issue of the 6th woman has been decided. The additional seat would essentially create a hung Parliament of 26:26, between the once-dominant HRPP and the newly-established FAST party. Without this seat, FAST have won the 9th April general election by 26:25.

In an urgent press release sent to all media this afternoon, Attorney General Savalenoa Mareva Betham-Annandale says recent cases between FAST and Government “all went against the Government and favoured FAST”.

“These are very substantive cases and the fate of a government of the day is determined by these cases. If we look at the previous trends, all the decisions favor FAST!” reads the Attorney General’s statement.

Savalenoa says the solution proposed by the Caretaker Government is to bring overseas judges to hear the matter given the question of independence adding this has been done for previous matters, similar to how lawyers and QCs have recently participated via zoom.

“The Judiciary have now moved this appeal forward on Monday next week for hearing.  It is our concern that given the recent issues with the Judiciary having impartial overseas Judges is the best answer to ensure a fair outcome for all parties involved,” states the Attorney General.

As the nation prepared to convene its XVIIth Parliament following a proclamation issued by the Head of State, the Attorney General filed a late submission to the Supreme Court on Friday afternoon seeking to revoke His Highness’ proclamation.

In a Minute of the Court Chief Justice Satiu Simativa Perese reminds the Attorney General that the interpretation of Article 44 relating to having a 6th woman in Parliament has already been dealt with by the Supreme Court. The AG was also reminded that their application to stay execution of that Supreme Court judgement has been rejected by the Court of Appeal in its decision delivered 12pm Friday afternoon.

“On a general footing, it appears that the questions that the Attorney General wishes to raise at this late stage of the lead up to the convening of the Legislative Assembly were adequately covered in the application for stay. The Court has ruled against the Attorney General’s application for stay of execution, and it has not invited any further submissions”, sated the Chief Justice.

The Judiciary has dealt with several applications from the FAST party on an urgent basis since Samoa’s April 9th general elections. First the issue of the additional parliament seat for women announced April 20th, four days after the official results were published April 16th.

The night before the substantive hearing of that case, the Head of State announced the country should return to the polls for snap elections. Then an AG application to have the FAST challenge discontinued after the Head of State’s announcement for fresh elections, was dismissed by the Courts.

The Court then delivered two decisions on Monday 17th May, one judgement declared the proclamation for fresh elections unlawful and reminded the Head of State of his obligations to convene Parliament within 45 days, and another to declare the additional seat void. The additional seat judgment was appealed and a stay of execution was heard and denied by the Courts last Friday. Upon that decision, the Head of State issued a writ to convene Parliament setting the Clerk of the Legislative Assembly into motion to prepare the programme for XVIIth Parliament of Samoa sending out over 500 invites. Also on Friday afternoon the Attorney General applied to the Court to  determine certain questions. The CJ issued a Minute with strong words to remind the AG the ruling of the Supreme Court represents the law in Samoa.

On Saturday night, the Head of State issues a second proclamation stating his original writ to convene is suspended until further notice for reasons still not yet known. On Sunday morning, a special sitting in Chambers on a pick-wick basis resulted in another set of Court Orders being issued, including one to declare unlawful the suspension of Parliament.

The application to disqualify judges will be heard next Monday 31st May 2021.