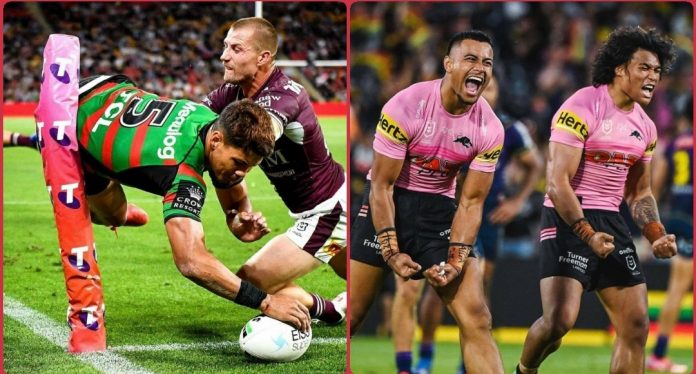 Seven Samoans are set to feature in this year’s NRL Grand Final after the Penrith Panthers and the South Sydney Rabbitohs emerged victorious in their respective Preliminary Finals over the weekend.

The Panthers will be looking to right the wrongs of last year’s 26-20 grand final loss to Melbourne Storm; where a late second half comeback was not enough to make up for the halftime score of 22-0 to Melbourne. Six Samoans were influential in Penrith’s 2020 season and all may return to play the 2021 Grand Final including 21 year old prop Spencer Leniu who has a chance to be called in if the injury cloud over Penrith forwards James Fisher-Harris, Tevita Pangai Jr, and Moses Leota does not lift in time.

Driven by Head Coach Ivan Cleary and his son Nathan Cleary as captain, Penrith have only lost five games in two seasons. Two of those defeats were to the Melbourne Storm, however, Penrith finally got their sweet revenge to eliminate the Storm in a brutal but close 10-6 win in Brisbane last weekend.

The Samoan contingency within the Panthers played a huge part in their Preliminary Final win. Stephen Crichton opened up the scoring accounts for Penrith after a pinpoint Nathan Cleary crosskick. The 21 year old Samoan-born winger who openly talks about how his faith in God drives his success, played his rookie season last year and already has 52 NRL games and 27 tries to his name.

Tyrone May had answered an SOS call in last weekend’s match when Toa Samoa and New South Wales halfback Jarome Luai went off with a head knock. May, who is used by both Penrith and Toa Samoa as a utility because of his ability to play every position on the field except wing, held his own against a heavy Melbourne forward pack.

Then Luai, after passing his head injury assessment on the sidelines, came back into the game at his absolute best. He combined with Fijian enforcer Viliami Kikau to orchestrate Toa Samoa winger Brian To’os crucial try that put the game just out of Melbourne’s reach. The explosive winger had returned from an ankle injury in time to provide a huge boost for the Panthers last weekend.

Owned by actor Russel Crowe and coached by the legendary Wayne Bennett, the Rabbitohs have not played a grand final since they won the national championship league in 2014. The two Samoans, Jaxson Paulo and Jaydn Su’a contributed immensely to the team’s 36-16 Preliminary Final thumping of the Manly Sea Eagles over the weekend.

Playing his second season for South Sydney, 23 year old Jaydn Su’a established himself as the competition’s most improved player in 2020 with 21 appearances that led to his State of Origin call up by Queensland. Su’a brought his hard hits with him on the weekend and disrupted the Sea Eagles attack plays. Su’a will depart South Sydney to join the St George Illawarra Dragons for the 2022 NRL season.

As for Jaxson Paulo, he helped himself to two tries against the Sea Eagles with his second still being talked about days after the match. Paulo took to the sky and perfectly secured a catch off a team mates’ bomb. Landing on his feet, he found his back turned away from the try line about 10 meters out.

With defenders all around him, he had no time to turn around and instead took several backward strikes that have now been dubbed as the ‘moonwalk’ as he went over the try line to score his double. Playing his second season with the Rabbitohs, 21 year old Paulo has continued that success to secure the starting wing spot for his side this season, and after Friday’s performance that is unlikely to change.