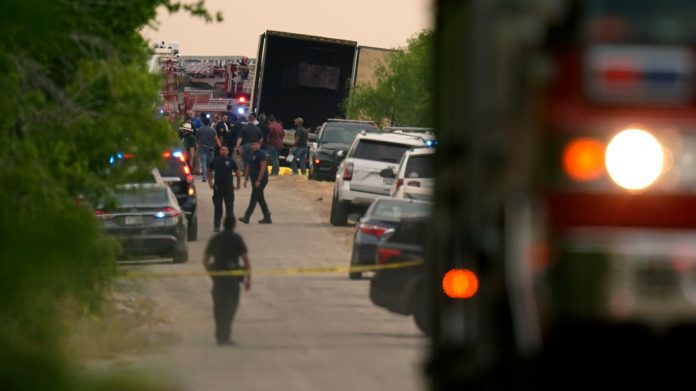 Three people were detained in what appeared to be one of the worst episodes of migrant death in recent years on the southern border. A heat wave in Texas has brought record temperatures and drought.

The discovery in San Antonio led to the arrest of three people, and several survivors remained in dire condition. It comes as authorities are struggling with a border surge.

The death toll from a scorching-hot tractor-trailer found in the Texas sun rose to at least 51 on Tuesday afternoon, as the authorities were working to identify the victims and searching surrounding fields for other passengers who might have jumped or fallen from the truck before it came to a stop.

The bodies of at least 46 people believed to be migrants were found on Monday in and around the abandoned tractor-trailer on the outskirts of San Antonio, officials said. At least 16 others were taken to hospitals suffering from apparent heat exhaustion and dehydration. Three later died at Baptist Medical Center, a spokeswoman confirmed. Where the other two victims died was not immediately clear.

The victims include 39 men and 12 women, officials in Bexar County, where San Antonio is, said in a Tuesday afternoon news conference. Officials said some of the victims could be teenagers, but their exact ages were not yet known.

Mexico’s foreign minister, Marcelo Ebrard, said on Twitter on Tuesday that the dead included 22 Mexicans, seven Guatemalans and two Hondurans. Others have not yet been identified.

At least three bodies were found strewn along the roadway, with the farthest about 75 yards from the truck, according to a law enforcement official with knowledge of the investigation. It was possible, the official said, that those found outside had died inside the truck and fallen out when its door opened.

Officials did not identify a cause of death, but suggested that extreme heat most likely contributed. The truck did not have operating air-conditioning, officials said, and the temperature reached 101 degrees in San Antonio on Monday.

The city’s fire chief, Charles Hood, said the people who were transported to hospitals were “hot to the touch.” An employee from a nearby business discovered the truck around 6 p.m. after hearing a cry for help, William McManus, the chief of the San Antonio Police Department, said on Monday.