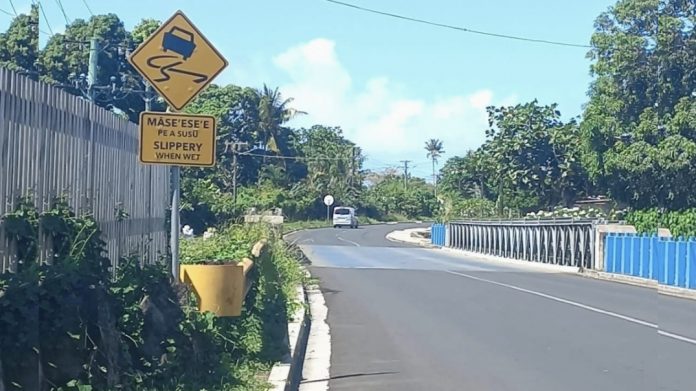 Samoa’s Associate Minister of Police and Prisons, Hon Fepulea’i Fa’asavalu Sua, has been issued with a $100 tala fine for careless driving following an incident where his Ford Ranger crashed into a fence on the side of the road near the Loto Samasoni bridge in Apia.

Police Commissioner Auapaau Logoitino Filipo said police were alerted to the accident by the Minister himself, on Monday morning 1st August 2022.

Police then carried out an independent investigation of the incident, and found that slippery roads from rain that morning, had caused Fepuleai to lose control of his government vehicle, which veered to the side of the road.

“Police found the Associate Minister did not see the warning sign that the road in this area gets slippery in the rain..”

A ‘SLIPPERY WHEN WET” sign has been placed at this particular stretch of road by the Land Transport Authority, just before the place of the accident.  Many vehicles have succumbed to the slippery surface of the bridge, rather than the tar sealed road.

Police Commissioner Auapaau pointed out that under section 38 of the Road Traffic Ordinance, careless driving is an offence that starts at $100 tala for lower-level offences, to 12 months imprisonment for serious offences.

S38 Careless Driving – If a person drives a motor vehicle on a road without due care and attention or without reasonable consideration for other persons using the road, the person commits an offence.

S 38(2) A person convicted of an offence against this section is liable to a fine not exceeding 10 penalty units or to imprisonment for a term not exceeding 12 months.

The Associate Minister’s Ford Ranger has a slight dent to the front left side, causing damage to the headlight and bumper.

No other vehicle was involved, and no-one was injured.

The Minister’s vehicle is fully insured, and the costs of repairs will be covered by insurance, said the Commissioner.