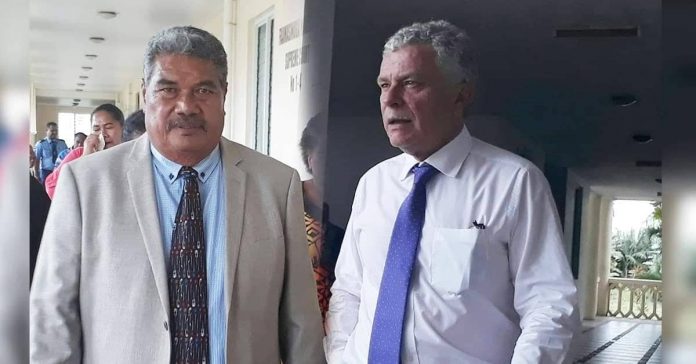 27 June 2019, Apia Samoa. The Associate Minister of the Ministry of Prime Minister and Cabinet MPMC, Peseta Vaifou Tevaga has denied claims he had signed 34 cheques from the Local Partners and Associates (LPA) account from 2013 – 2015.

The Associate Minister has been on the stand for 3 days before Acting CJ Vui Clarence Nelson in a police case against his former business partners Laauli Leuatea Schmidt, Apulu Lance Polu and others, who face over 200 charges in relation to the business dealings of LPA.

Aaron Perkins QC cited an exhibit alleging that Peseta had signed 34 cheques from the LPA cheque account for which he was the main signatory. Peseta denied signing the cheques adding that he was only aware of three to four cheques he had signed.

The Associate Minister challenged Mr. Perkins to present copies of the cheques in Court.

“I say this before God that this is not correct and unless you get those cheques from the bank to prove it,” said Peseta.

Mr. Perkins persisted, putting it to the Associate Minister that he was not telling the truth about the cheques that he had signed. Peseta continued to deny insisting that the cheques be brought from the bank as evidence.

Peseta told defense counsel that the the only cheques he signed were those that Apulu Lance Polu would bring to him for his signnature, for expenses such as water and electricity.

Peseta went on to say that Apulu Lance Polu and Laauli would bring in blank cheques and ask him to sign them, but he refused.

“They would ask me to sign an empty cheque and they will fill it up, so I said no,” said Peseta.

Mr. Perkins also put it to Peseta that he had sold a truck belonging to LPA.

Peseta denied selling any truck belonging to the LPA company, however, he referred to a truck that he says was given to the wife of former Cabinet Minister, Faumuina Tiatia Liuga, for the purpose of collecting nonu juice from his constituency in Savaii.

Peseta said this arrangement was agreed to by the Directors of LPA with some conditions.

“The conditions were that the ownership of the truck will be change under Faumuina Liuga’s wife’s name, so that if something happens to the truck they are responsible to fix it,” said Peseta.

“The other condition was for the truck to be returned to the company if in some way things did not go as planned.”

Peseta told the Court that the truck was returned to the company after plans to collect nonu from the Minister’s constituency was unsuccessful.

The trial is expected to continue for the next six weeks.