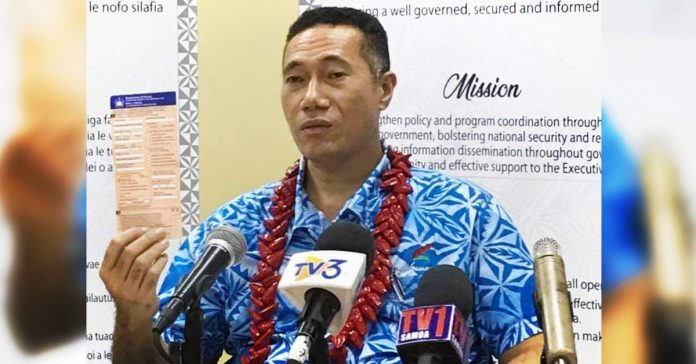 04 April 2019, Apia Samoa. Chief Executive Officer of the Ministry of the Prime Minister, Agafili Shem Leo who is also responsible for Immigration clarified that the arrival card every visitor completes when entering at Faleolo Airport is a declaration form to be taken seriously by visitors.

Agafili was responding to media questions about the case of Tala Pauga who was charged for making a false declaration on his arrival card.

Agafili says the questions and statements made on the declaration form are important requirements for Samoa’s border control agencies including Ministry of the Prime Minister, Immigration, Ministry of Police, Ministry of Health and the Quarantine Division.

Agafili stressed that the declaration form was a means of border protection for Samoa, as we do allow many countries visa free entry as visitors to support our tourism industry.

Agafili referenced the incident that occurred in Christchurch last month as an example.

“We never thought that this was going to happen;

He added that what people need to appreciate is that the Samoa border is different from borders such as New Zealand, Australia and USA because visitors do not apply for visas before they arrive.

“These countries they require a visa to enter their borders but we don’t.

Agafili says that this raises the bar for frontline immigration officials to ensure visitors are properly assessed and scrutinised and that includes the vital information on the arrival declaration form.