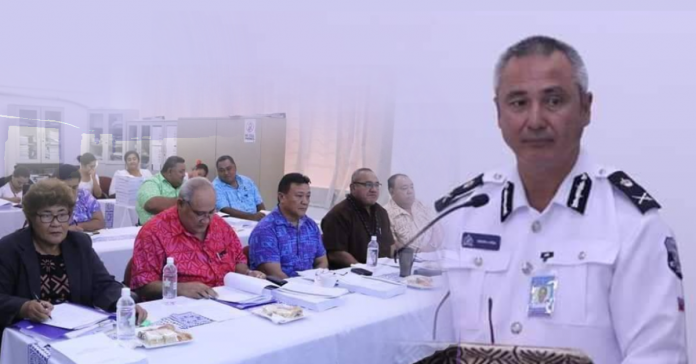 17 June 2019, Apia Samoa. An Act to amend the Arms Ordinance 1960 was discussed during a Parliament pre-sitting session held at the Tofilau Eti Alesana Building earlier today.

The amendment was presented to Members of Parliament by Police Commissioner Su’a Fuiavailiili
Egon Keil who explained that it was a necessary amendment, to specifically allow youth under 21 to participate in the sport of Shooting during the Pacific Games in July.

“This does not allow youth to be in posession of a firearm for any other activity, it is specifically for the Pacific Games,” explained the Police Commissioner.

The amendment also allows the Minister of Police to issue a permit for the importation of unlawful weapons for specific purposes such as the Pacific Games.

“It allows the Minister of Police the authorisation to legally bring currently unlawful weapons into the country for specific events like the Pacific Games;

“For example for Pacific Games, there is a participant who is under 21 years of age and this amendment lifts the technicality that affects them from participating in the sport of shooting”.

“So this will allow that individual to bring into Samoa his or her own gun to use for training and practice, at a specific location at the Tafaigata range, and to participate in the shooting competition only.”

Police Commissioner during his speech said that when Samoa hoated the Pacific Games in 2007, there was no such law, and technically there were people under the age of 21 that participated in the shooting competition even though it was illegal.

“Yes, there were participants in 2007 that were under 21 that legally should not have been shooting.

“So we are now updating our laws to accommodate for this and it also allows for our local youth under the age of 21 to participate at shooting competitions.”

Member of Parliament from Aleipata Itupa i Lalo questioned the Commissioner on why this matter was not done in the previous games.

Sua responded that he was not the Police Commissioner at the time, however, the Ministry of Police are correcting it now.

“Ai lava sa fai i luga o le masani, but technically speaking it’s not within the law, so we are correcting that now, to allow for proper authorisation.”