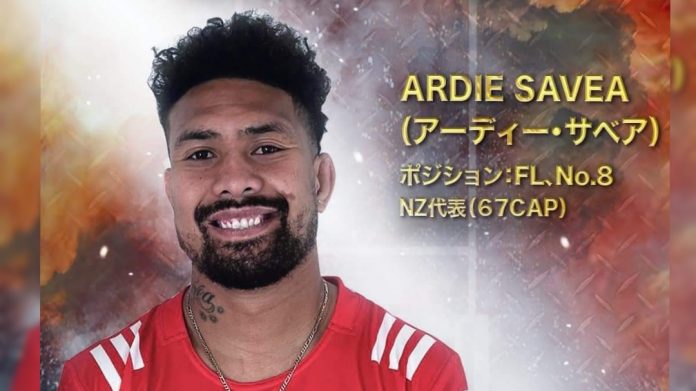 All Blacks and Hurricanes loose forward Ardie Savea has confirmed he will take an offshore playing break in 2024 before returning to rugby in New Zealand. Under the terms of the four-year contract extension he signed with New Zealand Rugby (NZR) last year, the 67-Test All Black will transfer to Japan at the end of 2023.

The 29-year-old will then return to New Zealand in June 2024 and play through until the end of the 2025 season.

“I’m excited to be joining the Kobelco Kobe Steelers after the 2023 rugby season,” Savea said.

“Although it’s far away, it’s nice to have clarity in what I’m doing and I think this change, for a short period of time, will do me and my family good.

“Playing in Japan is going to be an awesome experience and I’m ready to embrace their beautiful culture. I can’t wait to meet all the Kobe fans at the games and connect with everyone.”

NZR Professional Rugby Manager Simon Simmers added: “NZR are pleased for Ardie to be taking up an opportunity to play in Japan for six months after the 2023 Rugby World Cup.

“Super Rugby Pacific 2023 will be Ardie’s 11th year with the Hurricanes so to be able to play somewhere different after next year’s competition will be a great experience for him and his young family.

“We are supportive of this playing break that formed part of his contract extension signed last year through until the end of 2025.”

Under NZR Board policy, Savea will be immediately eligible to be selected by the All Blacks on his return in 2024 – an arrangement made for other long-serving All Blacks such as Beauden Barrett, Brodie Retallick and Samuel Whitelock in recent years.

“It is great news that Ardie is committing to NZ Rugby until the end of 2025,” said All Blacks Head Coach Ian Foster. “His leadership and form makes him a vital component of our planning.

“It is also great that the structure of this break away from New Zealand still enables him to be available for the entire 2024 All Blacks season.”

Having played more than 100 Super Ruby games for the Hurricanes, Savea is contracted to the club for the 2025 season.

“We’re really excited for Ardie and his family to have this opportunity to play in Japan after the Rugby World Cup,” said Hurricanes CEO Avan Lee.

“We are behind him all the way with this decision, and look forward to seeing him back in 2025. In the meantime, we still have the 2023 Super Rugby Pacific season with Ardie to look forward to.”