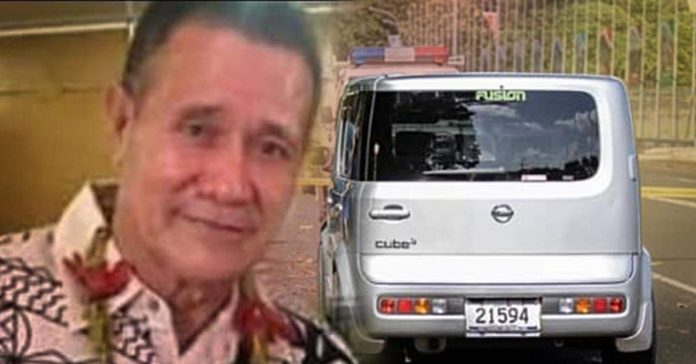 31 July 2019, Apia Samoa. Members of the Falelauniu Assembly of God (AOG) are in shock today with the sudden passing of their Senior Pastor Reverend Lui Seve found dead in the early hours of this morning at the back of a parked car.

Police Commissioner Su’a Fuiavailiili Egon Keil confirms that police are investigating the incident but there are many unknowns and an autopsy has been requested to determine cause of death.

“Our preliminary investigation indicates two adults, male and female, were found dead in the back seat of a vehicle parked on the street at Faleata,”

“The cause of the deaths are being investigated and an autopsy has been requested,”

“We are asking for the public’s help for any information that could help us piece the incident together,” added Commissioner Keil.

Speaking to Samoa Global News a church member of Falelauniu AOG who did not wish to be named spoke of a loving pastor who was like a son to her elderly parents.

“I was awoken this morning at about 5am to the wailing cries of my elderly mother; at first I thought she was doing her morning prayers but then I heard her crying get louder. I came out to see our Assistant Pastor sitting with them,”

“My father was sitting with tears and no voice and our Assistant Pastor was in the living room with them;

“He had come to deliver the heart breaking news to my parents who are amongst the very elderly members of our church.”

The church member, a 42 year old woman went on to say that Reverend Lui Seve loved his parish and treated them like family.

“When he sees that the youth are not in school, he would call us parents and follow up why;

“He once topped up my son’s NUS fees when he found out that I couldn’t afford all the subjects. He has done that for many of our youth”.

The church member adds that Reverend Lui had visited her parents yesterday morning. He was then missing for most of the day and did not turn up to the church evening prayer meeting.

“My mother said that he came by to our house yesterday morning to see them. He then left saying he was heading out to fill up his car,”

“My parents loved him as a son. If they are not at church Pastor and his wife would visit them straight after church and bring food”.

The Motootua hospital emergency unit confirms that the bodies arrived at 2am this morning (Wednesday), both declared deceased on arrival. The woman was in her 40s and is also a member of the Pastor’s parish.