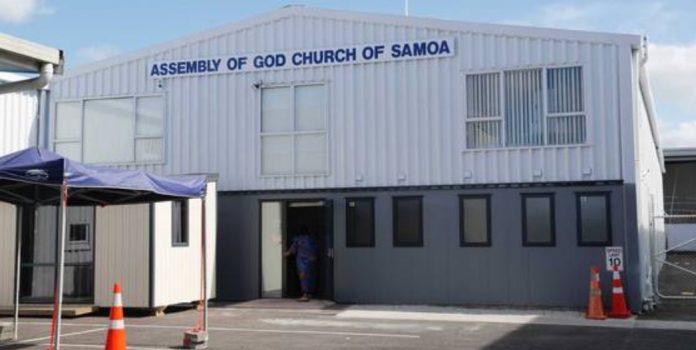 A number of positive cases including three in Wellington were at the church service and the event is now a priority for contact tracers, says Bloomfield.

Pacific health leader Dr Collin Tukuitonga said the AOG cluster is the biggest and will continue to grow.

“The immediate thing is that people need to get tested. That, to me, is the most important thing so they know if they’re a risk to their family or not.”

“It’s probably safe to say that the AOG cluster is giving us the most numbers,” he told the New Zealand Herald.

Prime Minister Jacinda Ardern made the announcement at the Beehive Monday afternoon.

Cabinet decided to keep all of New Zealand in lockdown until 11.59pm this Friday, said PM Ardern. That would allow additional data on how contained the outbreak was likely to be.

The decision would be reviewed on Friday, and an update given in the afternoon. That would depend on wastewater results, and where any further cases were found.

Ardern said they had not yet decided whether regions would only go down to level 3 once the decision was made to move out of level 4 – or whether they could move down levels further immediately, but said caution would always be a factor.

In Auckland, Ardern said level 4 had to be at least a 14-day cycle.

There are now over 400 locations of interest after the Ministry of Health just released 48 new locations.

They include a number of supermarkets, two schools and a few new Auckland bus routes.

The list includes Green Bay High School and Avondale High School, both in west Auckland and the Commercial Bay Mall in the CBD and Auckland Art Gallery.

Other locations include Countdowns in Mangere Mall, Mangere East and Greenlane.

This brings the number of locations of interest to 403.