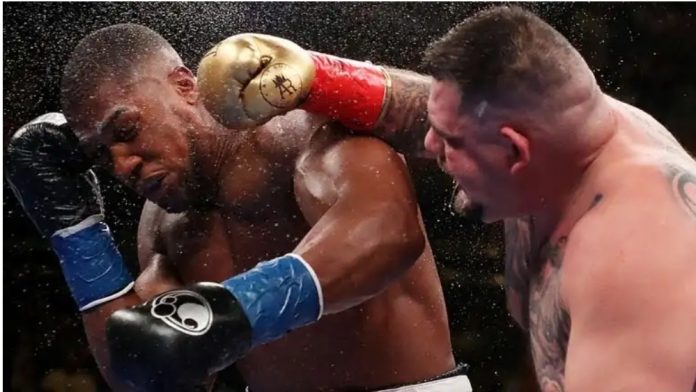 Not only did Ruiz get up off the canvas early in Round 3 in order to do what oddsmakers felt was nearly impossible, he showed tremendous poise, power and fearlessness in systematically dismantling Joshua (22-1, 21 KOs) to flip the heavyweight division upside down.

Ruiz, 29, a native of southern California, became the first boxer of Mexican descent to win a heavyweight title as he captured Joshua’s IBF, WBA and WBO titles with excessive force and heart. The upset was arguably the biggest within the division since Hasim Rahman stopped Lennox Lewis in 2001 and brought back memories of James “Buster” Douglas’ 1990 win over Mike Tyson.

The 29-year-old Joshua, the sport’s biggest star globally, never quite recovered from a pair of shocking knockdowns in Round 3 that took place shortly after he dropped Ruiz for the first time in the American’s career.

Ruiz never backed down from there despite letting Joshua off the hook in Round 4 when it was clear both fighters were heavily fatigued. Two knockdowns later in Round 7 and referee Michael Griffin jumped in at 1:27 to wave the fight off as Joshua was weary on his feet.

With the sold-out crowd, which was largely in favor of Joshua, stunned and silent following the stoppage, Ruiz jumped around the ring in wild celebration.

“Big respect to Andy, big big respect,” Joshua said. “[He’s a] good fighter. Thank you America. Thank you everyone for coming out this evening. Sorry I let my friends down, sorry I let my supporters down.”

The third round should easily go down as the best of 2019 after Joshua landed a beautiful two-punch combination to floor Ruiz. But Joshua got caught shortly with a left hook and right hand to the top of the head to drop him. Ruiz followed up with an unanswered, 12-punch flurry in the corner that fell Joshua a second time as the champion was lucky to survive the round.

“That was my first time getting dropped on the floor,” Ruiz said. “But you know what, it just made me stronger and made me want it even more. I just had to knock him down back.

“I didn’t want to throw everything that I got. I wanted to hunt him down even more, work the body, work the head and just listen to the game plan. We just pulled it off, man.”

The fight became tentative although Ruiz began to do a much better job getting inside Joshua’s eight-inch reach advantage as it became clear AJ wasn’t fully recovered from the earlier knockdowns. Ruiz hurt Joshua again in Round 7 and began to batter him with short power shots to produce a pair of knockdowns. Griffin gave Joshua every chance to continue but after AJ turned his back and walked toward the corner, Griffin waved it off.

“There’s no excuses. It’s my own fault. I got caught with a big shot,” Joshua said. “Congratulations to him. I would have preferred it to be Deontay Wilder, do you know what I mean? But it wasn’t. It was Andy Ruiz, and he deserves it, and the fame and fortune he’s about to receive.

“I don’t want anyone to kind of drown in their sorrows. This is boxing. It’s all the same. It just wasn’t my night. It was Andy Ruiz’s night. You know what? It’s good for the TV. It’s good for DAZN. It gets people watching.”

Both fighters showed immediate interest after the fight in Joshua’s contracted rematch clause.

“Of course, man,” Ruiz said. “Right now I just want to celebrate. I just made history, baby, for Mexico! It means everything, man. This is what I’ve been dreaming about since I was 6 years old.”

“We’ll make the rematch in the U.K., November or December,” Joshua added.

Ruiz outlanded Joshua, 56 to 47, according to CompuBox.