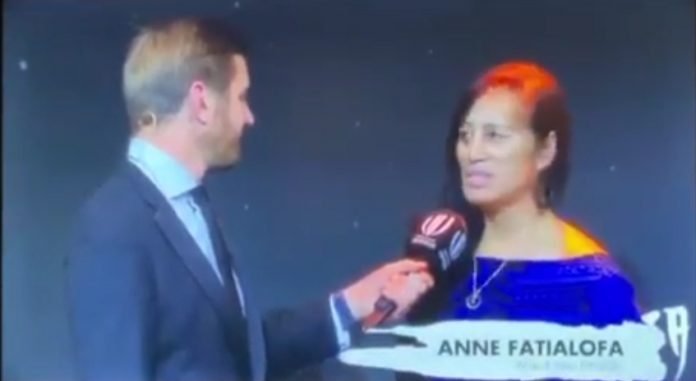 If you grew up in Samoa and Auckland rugby circles then the chances are, you’ve visited the home of the late Papaliitele Peter “Fats” Fatialofa and his wife Anne.

21 Kerrs Road, Wiri near Manukau bears many memories of rugby history both on and off the field for Fats and Anne, their 8 children and 10 grandchildren, as well as many others to whom Kerrs Road was a second home, over the years.

Tonight at the red-carpet black-tie World Rugby Awards, the stunning Anne Fatialofa walked across the world stage to receive her late husband’s award, and put Kerrs Road on the international spotlight.

“On behalf of Kerrs Road, we want to thank World Rugby. This means so much to us.”

On behalf of Kerrs Road means on behalf of every life touched by the late Papaliitele Peter Fatialofa, who opened his home to everyone and anyone who needed a meal, a place to stay, a getaway safe space or just a cold beer and someone to talk to at the end of a hard day’s work.

The warmth and homeliness of Kerrs Road is the true picture of a Pacific Island family home where everything is shared as a community. You could be excused to think you were back in Samoa, except that it is an address in the city of Auckland.

Everyone who has ever walked through its doors is made to feel right at home.

Kerrs Road does truly reflect the life and character of the late Papaliitele Peter Fatialofa. With open arms to welcome everyone, evet so generous and always giving without questioning why. Like Kerrs Road, the Hall of Famer was loving, fiercely loyal and a reliable friend and mentor to many.

Anne Fatialofa said the only touch of sadness is that it would have been nice if Fats could have been able to be there at the awards ceremony to receive his award.

“This is such an honour and a privilege; it would have been nice if he could be here to receive this award.”

Papaliitele passed away on the 6th of November 2013, and he is inducted into the World Rugby Hall of Fame just 3 days short of the 6 year anniversary of his passing.

Samoa’s rugby team has not been able to move past the pool stages of a rugby world cup since the era that was captained by Papaliitele in the back-to-back quarter finals of 1991 and 1995.

Papaliitele was a cornerstone of the Auckland pack that held the Ranfurly Shield from 1985-1993 and stalwart of the Ponsonby Club and retired with 34 caps to his name, 20 of them as captain.

Some Kerrs Road veterans and rugby internationals Kevin Senio, Faamalua Tipi, Tanner Vili and Anthony Mika all paid their way to Japan this week to support Anne and Jeremiah, wanting to be part of the celebration for Papaliitele’s induction.

“They came for Fats, as soon as they heard about the induction. A couple of them couldn’t get in to the ceremony but that didn’t stop them wanting to be here with us,” said Anne Fatialofa.

Fats becomes a Hall of Famer alongside Great All Black Richie McCaw and Sir Graham Henry.