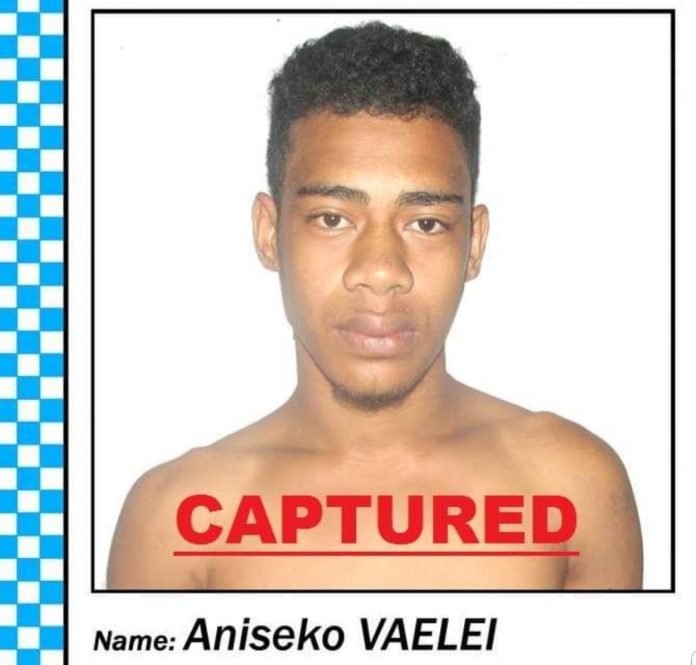 22 February 2019, Apia Samoa. The Samoa Police Service have today confirmed that Aniseko Vailei, one of the two prisoners who escaped from Tafaigata on Sunday 20th January has been captured following a home invasion at Vailoa this week.

Police say that information provided by the public led to the capture of Aniseko after an invasion robbery of the One-On-One shop at Vailoa in the early hours of Thursday 21st February.

A statement from Samoa Police says that initial indications did not link the incident to the two escaped prisoners.

“However, with a tip from the public, police were able to investigate further, culminating in the capture of one of the escaped prisoners, Aniseko Vailei.”

In an interview with Samoa Global News, the shop owner says that he was attacked by a machete and cash of $60,000 tala was removed.

Samoa Police confirms that, “a total of SAT$10,000 has been recovered and police are now pursuing leads in locating the whereabouts of the other prisoner, Pati Chong Nee”.

Samoa Police reiterates the cautionary warning that, “Members of the public are advised not to approach Pati Chong Nee as he is considered armed and dangerous”.

Samoa Police have also cautioned business owners about leaving large amounts of cash on the premises.

“Since a large amount of cash was stolen from this business, SPS advises business owners to deposit your earnings into a bank on a daily basis.”