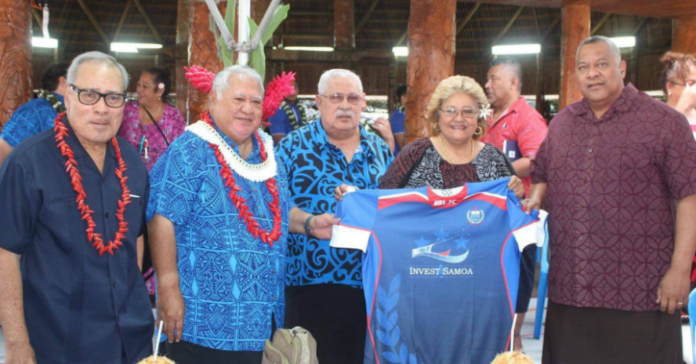 The financial report provides a complete list of all those who donated, highlighting the largest single donor as Senator Tuaolo Manaia and Mrs Fiapaipai Fruean with $10,000 + $1,850 from one of their businesses.

The donation by Tuaolo and his wife was presented to Tuilaepa at the Suigaula o le Atuvasa Beach Park in Utulei before it was handed back to be receipted and included in the overall count.

When the fundraising count ended on Thursday evening, the official count at the Fale Samoa headquarters was $148,150. Tuaolo and Fiapaipai heard this over the radio and called in to say their business, Nana’s Inc. would donate a further $1,850 to top-up the total to USD$150,000.

The next highest donation of USD$6,000 came from P.J. Wulf Engineering who also came to the Fale Samoa headquarters to make their donation.

The staff of Starkist made several donations through various divisions and shifts which totalled USD$2,272 as recorded and noted in the comprehensive report.

The report lists the names of every individual and company, with many in the vicinity of $100 to $300.
Many names are also listed for smaller amounts between $1 and $80.
Not reflected in the report is the generous sponsorship by construction company Pentagon Samoa Group based in American Samoa with a branch in Apia.
The CEO of SRU Faleomavaega Vincent Fepuleai said that the Samoa Rugby Union has received sponsorship support to the value of over USD$25,000.
“Pentagon Samoa provided airfares, accommodation, vehicles and incidentals for the fundraising team who went across to Pago;
“The owner of Pentagon Samoa Taupau Toluono also led the organising committee in Pago and we are grateful to him for making this all possible,” added Faleomavaega.
Prime Minister and Chairman of Samoa Rugby Union expressed his gratitude to the Government and people of Tutuila ma Manua.
“The players in the Manu Samoa are sons of both Samoas. We cannot go ahead to the Rugby World Cup without coming through American Samoa for your blessing,” said Tuilaepa.
“From the highest amount to the least, every donation is appreciated and valued by the sons of Samoa participating at this world event,” added the Prime Minister.
In a cover letter to the report, the Governor thanked Tuilaepa for visiting American Samoa in support of the fundraising initiative.
“Thank you for gracing us with your presence, it demonstrated your commitment, which added to the importance of this event, thus energizing our people to support this worthwhile cause.”

“It is my fervent hope that your aspirations and expectations relative to your anticipated financial outcome for this endeavor have been realized,” Lolo wrote.

“I am proud that we have been able to collaborate on an activity that will continue to enhance the image for all of us of Samoan ancestry.”

Miss American Samoa Magalita Johnson and former Miss American Samoa Antonina Lilomaiava were at the fundraising headquarters by 6am on the day of the event to help with the telephone lines while the team at the Department of Treasury recorded and collated the donations received.