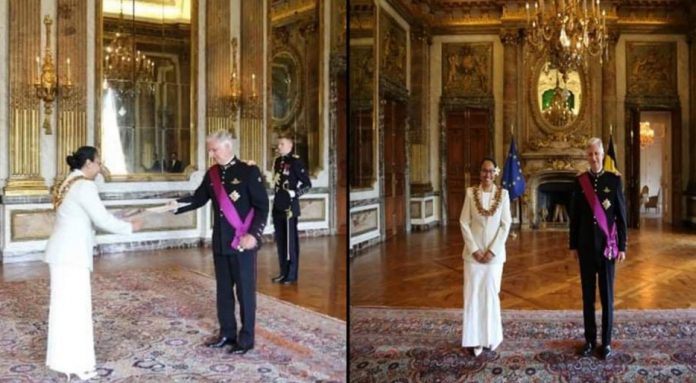 Samoa’s new Ambassador to Belgium H.E Ms Francella Strickland presented her credentials to His Majesty King Philippe of Belgium at the Royal Palace of Brussels, officially confirming her accreditation as Ambassador Extraordinary and Plenipotentiary of Samoa to the Kingdom and Belgium.

In the conversation following the presentation ceremony, Ambassador Strickland and King Philippe reaffirmed the good relations between the two countries and discussed issues of mutual concern including Covid-19, climate change, trade, tourism and education. The discussion allowed the opportunity for Ambassador Strickland to share with His Majesty the King, Samoa’s challenges and priorities particularly as a Small Island Developing State. They also discussed coverage of the work of the Embassy and its engagement with the EU and its member states, stats a Government press release.

The Ambassador was accompanied to the credentials presentation ceremony by Ms Fiona Lene-Samoa, Counsellor and Deputy Head of Mission and Ms Rae Manuleleua, First Secretary of the Embassy of Samoa in Brussels.

Ambassador Strickland will also be accredited as Head of Mission to the European Union, other EU countries and the United Kingdom. Her Excellency has more than 20 years experience in the Samoa foreign service which included postings as First Secretary to the Embassy in Belgium and Counselor and Deputy Head of Mission to the Samoa Mission in New York.

Before being selected as Samoa’s Ambassador to Belgium she headed the International Relations Division of the Ministry of Foreign Affairs and Trade.