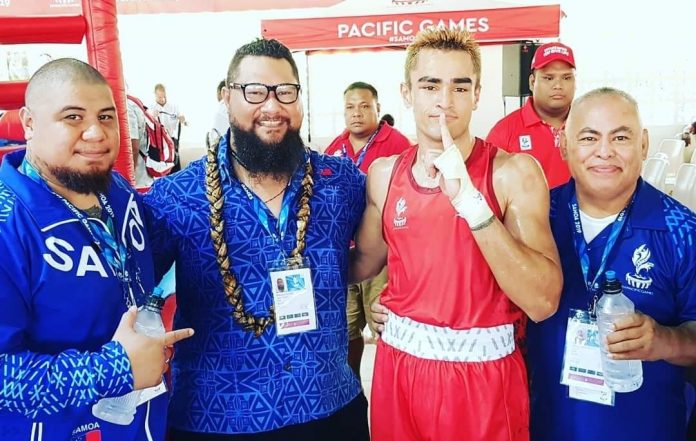 17 July 2019 Pacific Games Apia Samoa. The Samoa boxing team remain composed as they head into day 3 of the Pacific Games boxing competition with all Samoan boxers making it through to the semi finals.

“We are keeping a low profile, taking it one step at a time; all our boxers are focused as we head into semi finals,” said Tavui.

“We are thankful to God for his protection over the team. We are in good spirits and remain focused on the task ahead.”

Tavu’i says that our one female boxer Fa’aasu Loia will be fighting in the semi finals of the 75kg division tomorrow against her Tongan opponent.

“Fa’aaau is ready to go..she is sharp and she goes straight into the semi finals so she can’t wait;

“Her mom is Samoan from Savaii, married to a Tongan”, he added.

Our lone female boxer is being trained by former heavyweight fighter David “Tuaman” Tua, also an awardee of the New Zealand Order of Merit (NZOM).

Former All Black and Manu Samoa wing Tuigamala Vaaiga Tuigamala is the Team Manager while Fifita Tapusoa is the team’s Prayer Director.

In the men’s division Samoa has eight boxers also ready to take on the challenge ahead including Commonwealth Games silver medalist Ato Plodzicki Faoagali.

On Day 2 yesterday Samoa had two wins in the morning session by Alai Faauila and Jancen Poutoa. Tavui Mike Lemisio confirms that Alai Faauila of Samoa won by default because his opponent from the Solomon Islands was overweight.

Hugo Fata won by Knock Out against the Solomon Islander while Filimaua Hala beat his Tuvaluan opponent.

Tomorrow’s bouts for Samoa are:

The Head Trainer also adds that the Don Bosco Hall in Savaii has been packed every day with supporters.