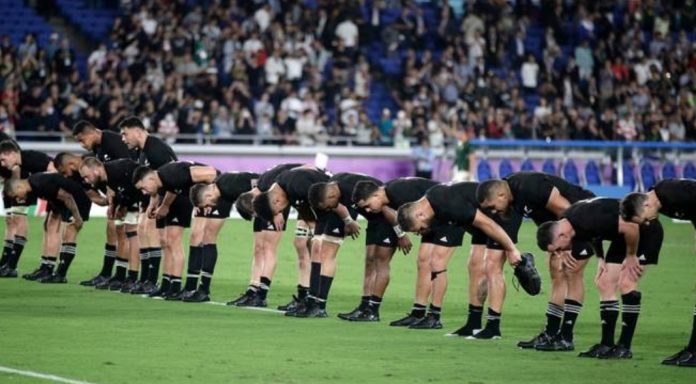 22 September 2019 RWC 2019. Aiming for a third consecutive World Cup title, the New Zealand All Blacks won the hearts of fans when they took a bow of respect before a 69,000-strong Yokohama Stadium.

Kieran Reid’s men lined up in unison for the gesture in the nature of Japanese culture after an impressive 23-13 win in their opening Rugby World Cup clash against the Springboks.

The All Blacks captain explains after the match, “It’s really important for us to connect as much as we can with the Japanese people. We know that they love us as All Blacks, but we need to show a bit of love back to them;

“Their support’s been fantastic so far and we saw that tonight – there’s plenty of fans with the black jerseys which is fantastic. We want to enjoy this tournament, get out and see as many people as we can, and hopefully win some more fans,” says Read.

The last clash between rugby’s traditional heavyweights was a 16-16 draw in July, and they went into last nights match with a 2 all tie in previous Rugby World Cup meetings.

The All Blacks have never lost a match in the pool stage of the RWC tournament and last night they outclassed their old rivals who could not turn their first half domination of possession and territory into points.

The Springboks responded to a spirited All Blacks haka with a dominating first 20 minutes but errors in fumbling high balla and lack of accuracy cost them as the reigning RWC champs  burst into life to score 2 tries within  5 minutes to lead 17-3 at half time.

The disruptive breakdown work of Ardie Savea frustrated the Springboks attack while the dominance of playmakers Richie Mo’unga and Beauden Barrett also shone.

Crusaders pair Sevu Reece and George Bridge who had edged out more experienced Rieko Ioane and Ben Smith to start in the All Blacks RWC opener did not disappoint.

22 year old Sevu Reece looked to have secured his place as the All Balcks starting winger with a huge workrate around the field.

Steve Hansen had said of the pair, “they have simply played so well in 2019 that their form demanded their inclusion.”

The All Blacks will now enjoy a long 11-day layoff, before taking on Canada on Wednesday night, early Thursday morning October 3rd at 12.15am in Oita Prefecture. They then have a four-day turnaround before Namibia on Sunday, October 6 at 6:45pm in Tokyo. Finally, the All Blacks head to Toyota City to battle Italy on Saturday, October 12 at 6:45pm.