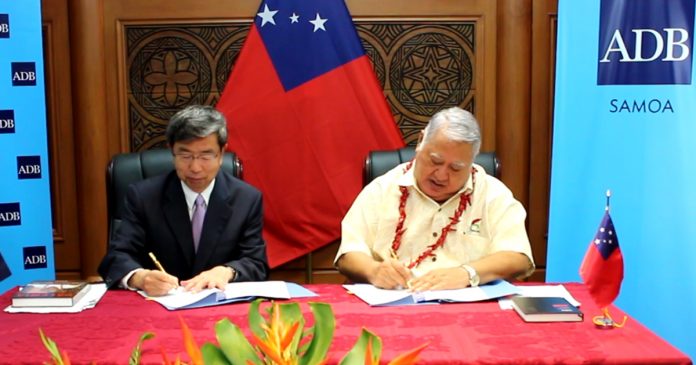 8 January 2019, Apia Samoa: A Host Country Agreement between the Government of Samoa and Asian Development Bank was signed today by Prime Minister Tuilaepa Sailele Malielegaoi and the President of ADB Takehiko Nakao.

“The office has already been established but the agreement was yet to be signed,” he said.

“It will be of interest to you that Samoa was the only independent country in 1966 when the Asian Development Bank was established.

“So Samoa was the founding member. For Samoa to be the host to an ADB office in this part of the Pacific is conceded a logical development.

“And I welcom very much the visit of the President of the ADB, the boss himself to come and visit Samoa despite the raging cyclone that hit our part of the world.”

President Nakao also mentioned the importance of Samoa being a founding member of the ADB in 1966.

“Today 13 other Pacific Islands have joined in as members of the ADB and we have been supporting these countries ever since,” he said.

“We have arranged meetings with Ministers and also Governors of the Pacific Island Countries because they face the common challenges of climate change, connectivity, transport and communication.

“I’m happy to come to Samoa as this is the first time I have come. I think this country has a very good potential of tourism, businesses, fisheries and even call centres because of the submarine cables.

“We hope that we continue to have a strong support for Samoa as we have been supporting the energy for the electricity sector.”