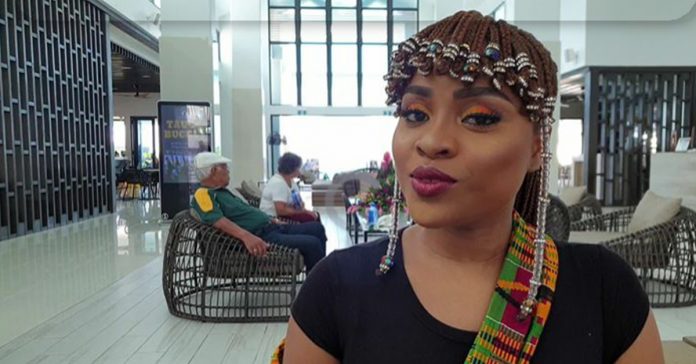 29 May 2019, Apia Samoa. Ghanaian-South African singer Adina Thembi Ndamse would love to record a song with some of the local artists before heading back home.

The 30 year old model, actress and singer is in Samoa for the first time to perform at the Seki Fest held at the Taumeasina Island Resort on the 31st of May.

“I would love to, and it would be great to do a song together with some of the local artists before I leave if that’s possible,” she said.

“Because I want to keep this connection that I have with Samoa going; for starters I would love to do that if any of the local artists are up for it, but if not I can still record overseas and send it over and put it together”.

She added that she would love to meet the first person who played her most popular song in the country “Killing me Softly” so she could thank them.

She said she knew her song bad become popular around the world, bit it was still something to see from Ghana, the many Samoan people on social media with Facebook and Instagram posts singing and dancing to her song.

“It was just weird, how far away you guys are from us, and there is still a connection,” she said.

“But the only thing I always wondered is that I really want to meet the first person who played my song here and I am looking for them because I want to say thank you to them.”

Speaking to Samoa Global News, Adina said she is overwhelmed with the Samoan culture and especially the people.

“Your people are so friendly, from the first day I arrived till now I am just amazed that I never knew of this small island country in the Pacific called Samoa,” she said.

“The people are so friendly, they welcomed me with open arms and they are so beautiful inside and out, I will try and make the most of this trip in this short period of time, but I will definitely come back after this trip.”

Asked what the people should be expecting on the night of the concert Adina said she is sure the people are expecting her to sing their favourite song.

“Well I’m sure the people will be expecting me to sing their all time favourite song, and I’m sure they are expecting to have a good time,” she said.

“But I also have to do a little bit of research to make sure I appeal to them the right way but most of all I’m looking forward to having a good time on the stage and I am hoping for them to have a really good time on the night.”

Adina started singing as a child. She joined the National theatre choir performaing at the Kidafest and Funworld events.

She was the winner of the music reality show “Stars of the Future in 2008.”

Her eighth music single titled “Too Late” won her two awards – Recordsof the Year and Best Female Vocals of the Year at the Vodafone Music Awards in Ghana.

The Seki Fest is the inaugural music festival where music artists from overseas will get the chance to visit Samoa.