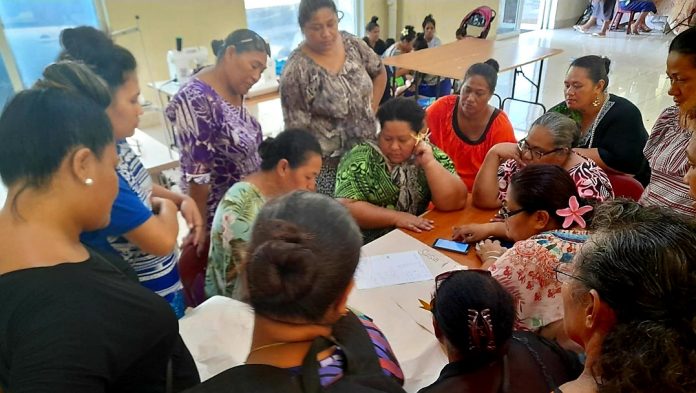 There is a direct relationship between women’s access to income and their ability to escape violence and control over them.

Having access to income generating activities and being able to earn a living can reduce economic stress for women, and increase their bargaining power in the household and give them the means to prevent or escape an abusive relationship.

“Thank you to the European Union through the Civil Society Support Program for funding SVSG’s efforts to support the sustainable income generation of the self-employed nofotane women. Together, we are building up strong women of courage and persevance, and helping to end violence through their economic empowerment.” said Siliniu Lina Chang, the Samoa Victim Support Group President.

The SVSG is a Non Government Organisation founded by Siliniu, originally set up as a refuge to young girls facing sexual abuse and rape within their home environments. With the lack of a  Social Services programme supporting victims of abuse, or a government funded initiative to address the various types of domestic violence in Samoa, the SVSG has since expanded its services to include a school for victims including those with disabilities, and the nofotane programme to address the prevalence of women living with the families of their spouses, from being abused.

Buildings on the House of Hope have been built with the support of donors such as Rotary International and the Ray of Hope initiative. SVSG receives a wide support from individuals, families, and private sector donors such as Digicel Samoa, BSP Bank, Samoa Stationery and Books, No-Cash Car Crew, Bluebird Lumber and Hardware, Comptech and many more.

More recently the Government of Japan provided additional houses within the Campus of Hope for SVSGs extended refuge services for abused women and their children.

Samoa Victim do receive the usual government per-student school fund that is distributed to private schools in Samoa, as well as inclusive education support for their role in educating children with disabilities on campus. However, there is currently no direct core funding from the Samoa government towards the social services provided by SVSG.

In a National Inquiry on Family Violence conducted by Samoa’s National Human Rights Institute (NHRI) it was found that 2 out of 3 women have experienced violence in their lifetime, perpetrated by their spouse or intimate partner through pushing, kicking, slapping, punching, strangling, or being hit with objects used as weapons.

Of the sample interviewed, 10% reported to have been raped in their lifetime, mostly by someone known to them or adult men who had the victims under their care.

If you or someone you  know is experiencing violence, please call the Samoa Police Domestic Violence Unit on 22222 or the SVSG free calling number below: