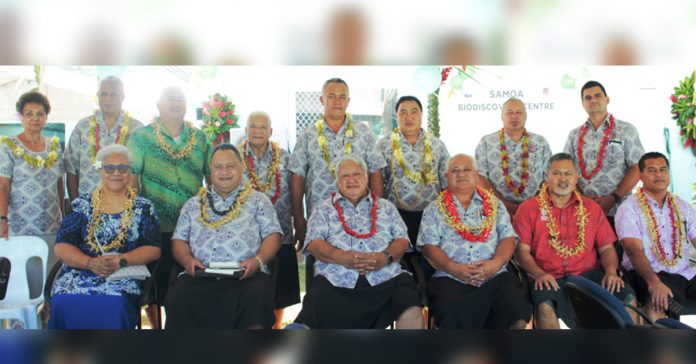 Hon Speaker and Members of Parliament

Members of the Diplomatic Corps,

CEOs and representatives of Ministries and NGOs

I am happy to join you all today to mark the launching of the ‘SAMOA BIODISCOVERY CENTRE’ here at the Scientific Research Organisation of Samoa.

The launch of the Centre today signifies a commitment by the government to support scientific research by our scientists on issues relevant to the health of our people and to generate new biomedical knowledge for better health outcomes.  Specifically, the Biodiscovery Centre shall focus initially on the identification of anti-cancer, anti-microbial, and anti-diabetes agents from natural products.

The need for this Centre is highlighted and reflected as major health challenges faced throughout the world today.  According to the World Health Organization, cancer is the second leading cause of death globally, and our National health Statistics confirms the same trend for Samoa. There is also a world-wide effort to combat antimicrobial resistance, a major health concern resulting from the high incidence of antibiotic resistant microorganisms.  Similarly, there has been a steady rise in statistics for non-communicable diseases such as diabetes, which is a leading cause of blindness, kidney failure, heart attacks, stroke and lower limb amputations.  The social and economic impacts of these health issues in Samoa are therefore significant and increasing, and proving to be a heavy burden on government resources.

Establishment of this Biodiscovery Centre was funded by the Government of Samoa.  Funding of ST250,000 was approved by the Cabinet in April 2019, and SROS together with the Ministry of Finance, ensured efficient utilization of funds to procure new scientific equipment, build a teleconference room, and facilitate the requisite renovations of an existing building now transformed into the Centre you see before you today.

The Centre provides an opportunity for Samoa to lead and carry out its own bio-medicinal discoveries, encouraged by an increasing understanding that locally sought solutions are highly beneficial to development efforts.  These types of research have the potential to put Samoa on the map as a Pacific leader in realising the potential of natural resources, as well as contribute positively to addressing significant health issues plaguing our country and its people. In addition, the outcomes from this work can also guide our environmental sector in identifying plants of scientific relevance for conservation and propagation efforts.

Importantly I also acknowledge, the partnerships forged and cultivated through the establishment of this Research Centre in order for it to achieve its overarching purpose. In particular, we would like to recognize and commend the partnership formed between SROS and the Maurice Wilkins Centre, a world class research centre based in New Zealand, known for making exciting scientific discoveries in biomedical research.  Such research partnerships provide vital assistance to Samoa such as strengthened affiliations of SROS to Maurice Wilkins Centre’s member laboratories, and the facilitation of a training platform for SROS researchers.

The government appreciates and is encouraged by SROS taking the initiative to venture into this crucial area of research, hence its resultant commitment to SROS and its work through the dedication of this entire building to biodiscovery research.

This landmark initiative further highlights Samoa’s capacity to progress through innovation.  This centre is where ground breaking biodiscoveries by our people will be made which will add to the gains of our development efforts.

Finally I extend to all who have worked hard to ensure fruition of this new venture, the congratulations and faamalo of the Government. It gives me great pleasure to declare open the doors of this research centre and launch the genesis of successful research work in the near future.