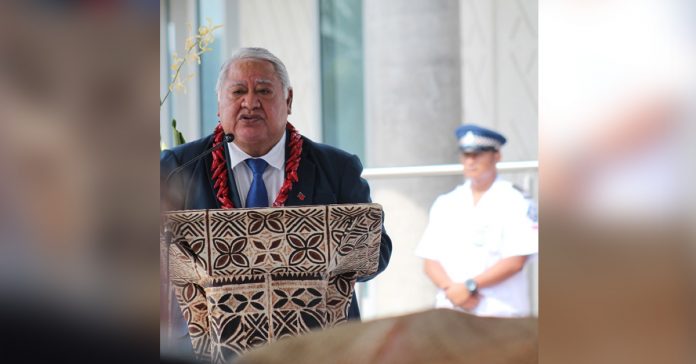 It is an honour and privilege for me as Prime Minister of the Government of Samoa, to welcome you all to this momentous occasion celebrating yet another milestone in the history of our Parliament of the Independent State of Samoa – ‘The Opening of this new Parliament House’.

According to the History of our Parliament, the first Maota Fono commenced construction on the 21 July 1916, the Master carpenter/ Construction Foreman was a matai by the name of Solofuti Fili and his carpentry crew from the village of Satoalepai, Savaii. The construction work was completed on 18 August 1916.

The total cost of the project was £30pounds, equivalent of $60.00 Tala, paid by the Government of Samoa.

In 1972 the second Maota Fono was constructed and opened on 31 May 1972. It was a gift from the New Zealand Government in celebration of Samoa’s 10 years of independence. The building was designed by a Canadian architect who incorporated certain cultural elements, such as openness in the design of the building.

As Prime Minister of Samoa and on behalf of the people of Samoa, I acknowledge with gratitude the great contribution by the Government of Australia in assisting with the funding of this iconic infrastructure. This building is a symbol of Samoa’s long-standing and enduring partnership with the Government of Australia with this year being the 42nd anniversary of diplomatic relations between the two countries.

Improved governance is a priority in the Samoa-Australia Partnership for Development. This new Parliament building will ensure improved access for the people of Samoa to parliamentary processes and will also support good governance strategies.

The building is modern, functional and cost effective, and is appropriately fitted out to support and meet the 21st century needs of Samoa’s parliamentary processes and practices.

The design of the new Parliament building reflects Samoan traditional architecture. It incorporates elements of a typical Samoan meeting fale such as concrete pillars on the exterior with sinnet-woven decorated tops while the chamber ceiling is inspired by Samoa’s national flower – the teuila. The parliamentary mace as presented today is another example of how elements of our Samoan culture and history have been incorporated throughout this project.

Though this new building is similar in structure to the former building, the design of the chamber incorporates the use of natural daylight in a controlled manner. It utilises environmentally sustainable practices, appropriate mechanical services with durable construction techniques aimed to enable practical maintenance and economical long life.

It should be noted that there are a number of items yet to be provided to complete the decor of the Maota including the Members Chairs and the Rug to furnish the innermost circle of the house.

The Master Plan of the Parliament Complex takes account of a future plan to refurbish the concrete ‘podium’, the ceremonial steps and rebuild the Legislative Assembly Office and Luafatasaga building. We are again grateful to the Government of Australia for its agreement to fund the new offices for the Legislative Assembly. Plans are already underway for the design and construction of this new office.

There are individuals and organisations that implemented this project that I wish to commend specially:

I commend the work of the former Speaker, Hon. Laauli Leuatea Polataivao Fosi Schmidt and the former Clerk of the Legislative Assembly, Fepuleai Attila Ropati who were instrumental in initiating the discussions and the design of the new Maota Fono back in 2012.

I also commend the project management consultant Manteena and team of consultants –Guida Moseley Brown Architects, Northrop Engineers, Norman Disney Young Engineers and others for developing the design and managing the construction of this project. I want to stress this point, that in selecting Craig Construction, we followed the Government process, the standard process of tendering out our Government works, all Government works. The tenders are then opened by the tendering committee that included the Minister of Finance and the Minister of Works with the engineers, the Attorney General and also other government technicians to ensure that the process is correctly carried out. The committee then submit the tenders which are opened in the presence of all the tenderers, so that each tenderer will know what the other guy tendered for. An evaluation is then carried out by a specialised committee. That evaluation will then be presented to the Tenders Committee for their final analysis before submission to Cabinet for its approval. So out of the 13 Ministers in Cabinet, the Prime Minister and his 12 Ministers will be discussing and tearing apart the decision that is promoted. There are times when the Cabinet refers back the tenders to the Tenders Committee for further re-evaluation some of the tenders we don’t agree with before resubmission for a final decision. Why I have stressed this very important point is because we have often been condemned for corruption in the decision making relating to the choice of tenderers. And I want to stress here again and again and again because there’s so much rubbish emanating from here in Samoa and picked up by OLP and SSIG, people that are floating around with fake news to mislead our people-creating hatred amongst our people.

I also commend the fine workmanship by local building contractor Craig Construction Ltd in delivering this building. This building is a showcase of quality skills of our local tradesmen and women that Samoa can be proud of.

I thank the Speaker, Hon. Leaupepe Taimaaiono Toleafoa Faafisi and staff of the Legislative Assembly and officials of both Governments of Samoa and Australia for ensuring the execution of this building is carried out to meet the Parliament’s requirements.

We thank you once again for participating in this momentous ceremony.