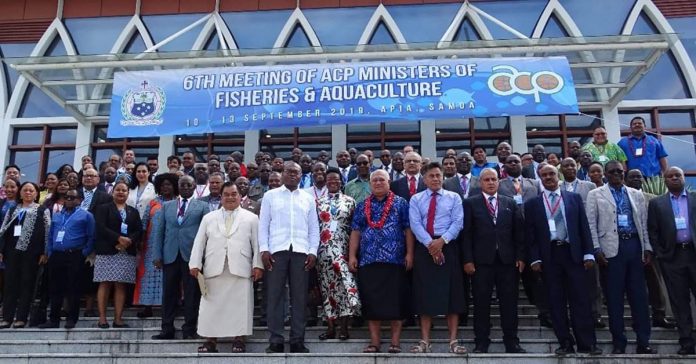 10 September 2019 Apia Samoa.  The African Carribean Pacific (ACP) Ministers in charge of Fisheries and Aquaculture are holding their 6th meeting in Apia this week with over 175 international delegates representing some 56 ACP member states and 19 regional and international organisations.

The meeting takes place every two years and Samoa put forward it’s bid to host when the Ministers last met for the 5th conference at the Bahamas in September 2017.

Speaking to the media at the conclusion of yesterday’s sessions, Assistant Secretary General of the ACP Mr Viwanou Gnassounou said that a new agreement would be signed here in Samoa to continue the partnership between the EU and ACP member states.

“We have agreed to sign an agreement here in Samoa;”

“This agreement is for EU and ACP countries to continue their partnership as the current agreement will expire later this year,” he said.

Mr Gnassounou says this is an important partnership for Pacific, Asia and Carribbean countries, as it provides resources for development.

“That includes areas of cooperation in elements of fisheries, and agriculture. Forty million euros was given by the EU for those developments,”

“It might be seem small, but it is the beginning of something,” adds Gnassounou.

According to the Secretary General, ACP countries secured 3 billion euros from 2014 – 2020, which was distributed amongst ACP member countries to create activities that benefit countries.

Samoa’s MInister of Agriculture and Fisheries Hon Lopao’o Natanielu Mu’a says that our share from these funds went to agriculture and fisheries development initiatives such as our faisua and tilapia.