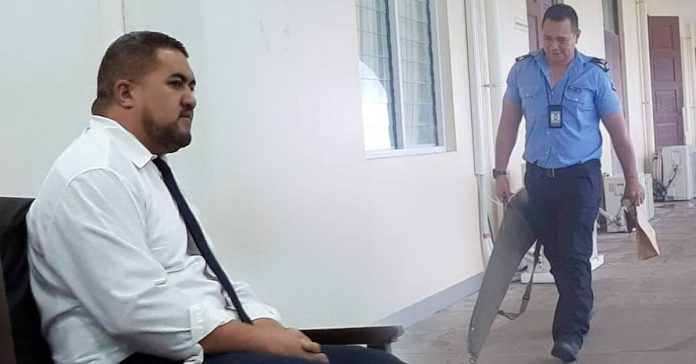 Tulaga took the stand on the fifth day of the trial to testify that his partner had tried to commit suicide and that the gun had fired accidentally when he tried to remove it from her.

The man who referred to himself as “the taro guy” according to the Police Commissioner, testified that the gun had accidentally fired during a struggle as he had tried to remove it from Ms Rimoni, who was trying to take her own life according to the accused.

“When I looked up, she was trying to shoot herself, so I tried to remove the gun from her, and that is when it had suddenly fired,” Tulaga told the Court.

During cross examination, prosecutor Leona Su’a-Mailo questioned Tulaga about a 12-gauge Remington shotgun that police had recovered from his mother’s home at Vailoa where the incident took place on the 15th January this year.

The accused disagreed with all other witnesses with regards to the shotgun which was produced in Court by prosecution.

Throughout his testimony, Peter Tulaga insisted that the gun which caused Ms Rimoni’s injuries was a different 12-gauge action pump shotgun from the one in Court

“This is my father’s very old gun. It doesn’t work properly. It is too old.”

Last week the head of the Tactical Operation Station Tagaloasa Toddy Iosefa told the Court that he had tested this same gun and had found it to be in good working condition.

Tagaloasa Toddy who is also responsible for firearm registrations in Samoa told the Court that the gun recovered from the crime scene was not registered.

Tagaloasa further added that only one firearm was registered under Peter Tulaga , however that firearm was transferred to Aiono Paepae in 2016.

However during his testimony the accused insisted that the Samoa Police records were wrong and that he did have his replacement gun registered.

“On the day that I sold my old shotgun and transferred the ownership to Paepae, that was when I told all the police officers there that I was going to upgrade my gun;

“My new gun was about a metre long. It’s a new shotgun, it is registered,” said Peter Tulaga.

Prosecutor Leona Sua-Mailo put the testimonies of other witnesses to Peter Tulaga.

“Peter; your brother Paulo testified that this is the gun you use for your plantation, and you would sometimes give it to him when he goes to the plantation;

“Your sister Melania also testified that this gun lay outside the door of the house when police arrived and so she handed that gun over to the police after the incident;

“Toddy also testified that this gun has been tested, and it is in good working order; and that there is no firearm registered under your name;

“The ballistic specialist from overseas also took this gun away and tested it, and he testified that he did not find anything wrong with it,” said Leone Sua-Mailo.

“Are you saying, Peter, that all these witnesses were wrong?” asked prosecution.

Peter Tulaga also disagreed with the testimony of  Police Commissioner Sua Egon Keil about a phone call he had made on the night of the incident.

Sua told the Court that towards the end of the phone conversation, the accused had changed his story to say that Frysna had attempted suicide.

Ms Sua-Mailo gave the accused the shotgun and asked him to point it at himself, as if he were going to shoot himself, and so demonstrate what he had seen Frysna allegedly do on the night of the incident.

Tulaga reluctantly held the gun up, pointing the gun towards the side of his head while he stood in the witness box. His left arm was outstretched, leaving the trigger to be pulled only by his thumb.

“Would you agree that Frysna has a short stature?” questioned the prosecution.

“How could Frynsa be able to reach the trigger of the shotgun, to attempt suicide as you say?”

Peter Tulaga responded that he cannot demonstrate what he saw Frysna do with the gun provided because the gun before him was not the gun that caused Frysna’s injuries.

“Your Honour, this is not the gun,” insisted Tulaga.

“I cannot show you what I saw because this is not the gun.”

“This is my father’s very old gun. I gave this gun to my brother because I can’t give him my new gun.”