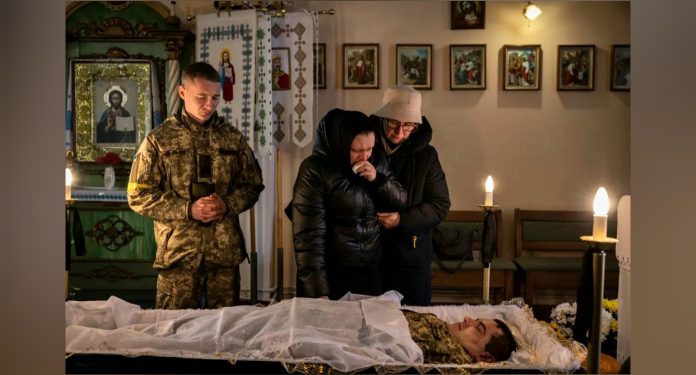 YAVORIV, Ukraine — Residents of this small town in western Ukraine spilled out of the small Orthodox church, along the sidewalk and across the road, standing silent in the bitter cold to honor the first of their soldiers to die in the war.

Senior Sgt. Yevhen Verveyko, 27, an artillery specialist and instructor, was killed in an artillery strike on his position north of the capital, Kyiv, on the night of Feb. 27, just four days after the war began.

He was not a native of the town but had settled there several years ago with his wife, Anzhelica, 24, after being forced to flee his home in one of the contested regions of eastern Ukraine because of the fighting. His mother was not able to travel to Yavoriv for the funeral; nor was his brother, who was in the hospital awaiting an operation that had been postponed with the outbreak of war.

But his adopted town and his military unit gave him a solemn, heartfelt burial. Orthodox priests held a sung liturgy and led a procession to the cemetery, behind religious banners and a Ukrainian flag.

A bell tolled as eight soldiers, many of them in tears, carried the coffin of their comrade, draped in the bright blue and gold flag of Ukraine.

The artillery barrages were so intense on the frontline, where invading Russian forces have been bearing down on the capital from the north, that the Ukrainian army was not able to retrieve the sergeant’s body for six days, an officer said.

The officer, a lieutenant colonel who only gave his first name, Vitalii, wiped tears from his eyes. He was responsible for providing moral support to bereaved families and said that Ms. Verveyko had refused to believe her husband was dead until she saw his body.

Eventually, volunteers from army veteran groups managed to reach the area and bring back his body, Vitalii said.

Ukrainian officials and the United Nations have announced that at least 350 civilians have been killed in the war so far but have not released military casualties. A second soldier died in the same attack that killed Sergent Verveyko, and several were wounded, Vitalii said.

Anzhelika Verveyko, center, during the funeral for her husband, Senior Sgt. Yevhen Verveyko, on Sunday.Credit…Ivor Prickett for The New York Times

“We have been doing a lot of these ceremonies,” he said. “The hardest thing is to see their children’s eyes.”

A police escort closed the roads, and a military brass band played a funeral march. Townspeople came out of their homes, and dropped to their knees as the procession passed.

Sergeant Verveyko died of fatal shrapnel wounds, his commander said, reading an official address at the gravesite. “We say goodbye to a warrior and a patriot,” he read.

In addition to his wife, Sergent Verveyko left behind a 3-year-old son, Maksim, and a 2-month-old daughter, Ivanka. The family had been waiting for his return from the front to have her baptized.