The US Navy has announced that a sailor aboard the COVID-19-stricken USS Theodore Roosevelt has lost his battle with the disease.

The sailor, whose name was not released, pending notification of family, tested positive for COVID-19 on March 30 and was placed in isolation. He was found unresponsive in his room April 9 and moved to intensive care at a U.S. Naval Hospital in Guam, where the aircraft carrier is docked. He is the first active-duty service member to die of the disease.

“The entire department is deeply saddened by the loss of our first active duty member to COVID-19,” Defense Secretary Mark Esper said in a statement.

“Our thoughts are with the family of the USS Theodore Roosevelt sailor..  We remain committed to protecting our personnel and their families while continuing to assist in defeating this outbreak.”

As of Easter Sunday, 585 members of the 4,800-member crew had tested positive for the coronavirus.

The USS Theodore Roosevelt is a Nimitz-class nuclear powered aircraft carrier, docked along Kilo Wharf of the US Naval Base in Guam.

A Samoan man from Vaiusu confirms that his brother is aboard the US aircraft carrier. He says they are in contact with his brother and at this time, the Samoan sailor is still on board the ship, but is safe and not infected. The family are also in the middlle of a separate faalavelave of a funeral burial in Samoa this week.

The Theodore Roosevelt arrived in Guam last month after visiting Vietnam. Authorities now believe a number of the crew members had been infected during shore leave in Vietnam.

By late March, more than a hundred sailors had been diagnosed with Covid-19. The aircraft carrier held only around 800 testing kits, but the Pentagon announced it would fly in enough kits for everyone aboard.

The warship’s commanding officer, Captain Brett Crozier who wrote a letter seeking permission to put nearly 3000 sailors onshore in order to limit the rate of infection in the cramped below-deck quarters was fired by the Pentagon.

“This will require a political solution but it is the right thing to do,” Crozier wrote to US Indo-Pacific Command in Hawaii.

“We are not at war. Sailors do not need to die. If we do not act now, we are failing to properly take care of our most trusted asset — our sailors.”

The Pentagon were angered when the memo was leaked to the San Francisco Chronicle and On 1 April, Capt. Brett Crozier, was relieved of his command and acting Navy Secretary Thomas Modly had also later resigned, taking the for dismissing Crozier after public outcry.

The Navy has since reported to have tested 92% of the Roosevelt’s crew as of Sunday and moved nearly 4,000 sailors to shore. Sailors remain aboard the ship to operate its nuclear reactors, guard its weapons and aircraft, and sanitize the vessel. 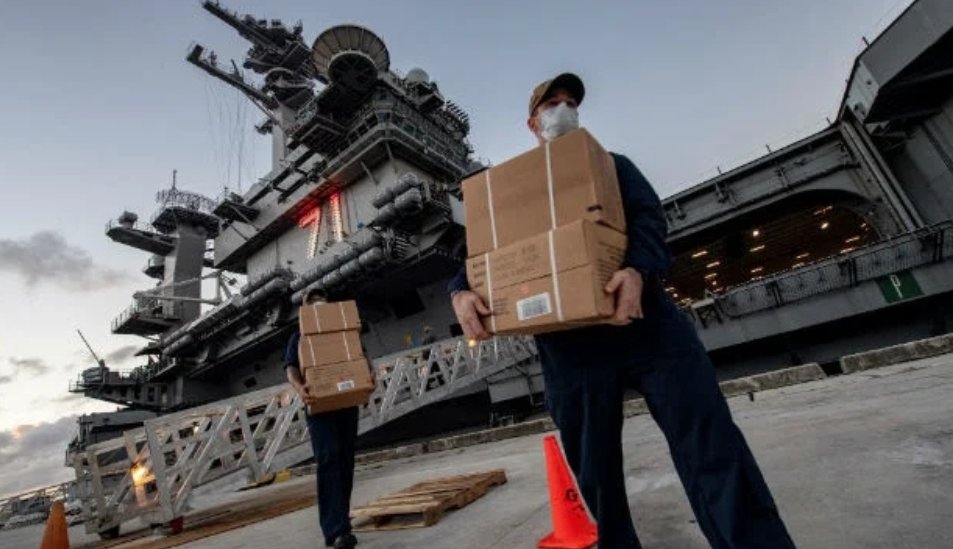 People in Guam are used to a constant U.S. military presence but some are nervous as hundreds of sailors from the coronavirus-stricken Navy aircraft carrier flood into hotels for quarantine. US and Guam government officials insist they have enforced strict safety measures.

Nic Maclellan reported in Inside Story that the local women’s and community organisations in Guam are angered that the US government isn’t matching its care for the infected military personnel with support for the local community.

“The hospital I work in, we only have fourteen ICU beds — the other civilian hospital has even less,” said Pim Limtiaco, a health worker at one of only two civilian hospitals in Guam. “We may not have enough beds to ventilate those that are very critical.”