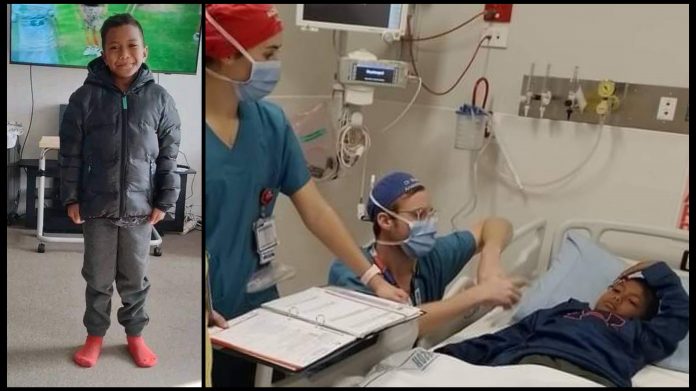 Faaoo Papu is a mother facing one of the most difficult situations a parent can ever be in. Her eight-year-old boy, Luckypumba Sa, who was taken to New Zealand under the Government of Samoa’s healthcare scheme has been diagnosed with a rare type of cancer, which according to a New Zealand doctor’s report, “is not one of the funded diseases that we have agreement for.”

The Intensive treatment, according to the diagnosis now received by the family, would cost at least $250,000 NZD.

With good intentions, Lucky was taken to New Zealand under the Samoa Government funded health scheme, with suspected Wilms tumour – a common renal cancer in children that according to medical reports, is easily treated with a high survival rate.

Sadly for Lucky’s parents, he has since been diagnosed in New Zealand with something much more serious.

Lucky has Ewing (Yoo-ing) Sarcoma that has metastasized, and according to a doctor’s report received by the family, it originated in his right kidney, and has spread to other organs, “extending beyond the renal capsule and “not deemed to be a resectable” or in other words, cannot be removed with surgery.

The report, dated 8 June 2022, is written by Dr Mark Winstanley, who states that, “Ewing Sarcoma with locoregional metastatic disease is difficult to treat.”

He explains that the treatment to give the best chance of success for what Luckypumba has, “is intensive, including chemotherapy over a nine-month period, usually radiation and surgery.”

“Even with all of this intensive chemotherapy that requires substantial amounts of time in the hospital,” writes Dr Winstanley, “the cure rate for this would be at best 50%.”

“Even those who are survivors still have high likelihood of long term toxicity from the surgery, chemotherapy and radiation, and often have multiple medical supports required lifelong,” reads the report. 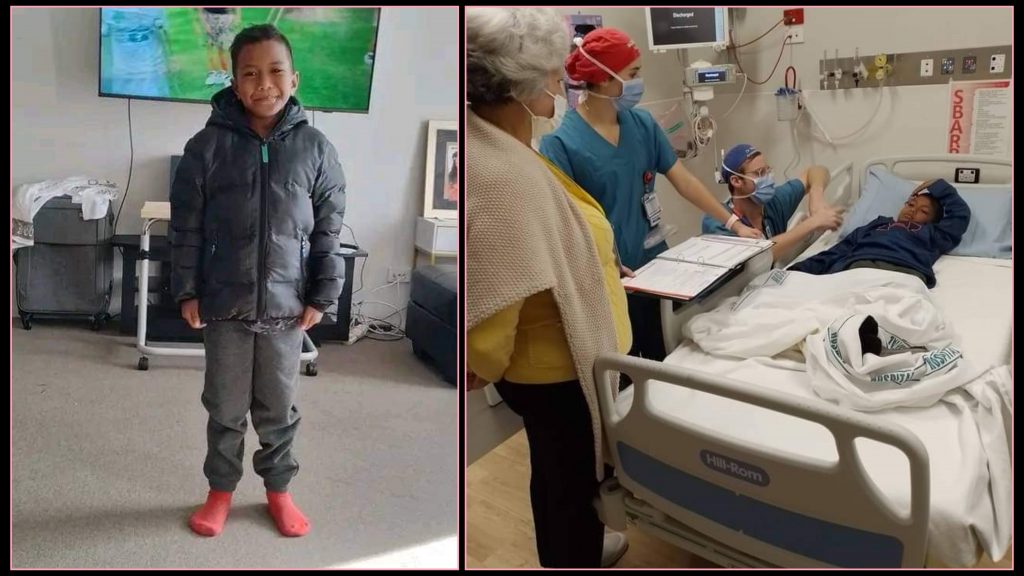 Luckypumba’s parents and family have been given this information, and despite the gravely discouraging diagnosis, they hang on with faith and a glimmer of hope at the words, “the cure rate for this would be at best 50%”.

But that’s not all.

As stated by Dr Winstanley in his report, “unfortunately, in this situation as a non resident, Luckypumba is not eligible for New Zealand funded healthcare and the Samoan Government funded agreed pathway is that Ewing Sarcoma is not one of the funded diseases that we have agreement for.”

Desperate to save her son’s life, Faaoo and her husband, as well as their family in New Zealand, asked if this was something that they could fund privately.

Dr Winstanley writes, “it is incredibly expensive in the $250,000+ range and as there is always a risk of complications, the costs are not guaranteed to a specific amount.”

Making his recommendation clear that there is nothing more that can be done, the medical report reads..  “If it was $250,000 with a 95% chance of cure, this would be a very different scenario than this situation.”

“It is our recommendation that Lucky and his family return to Samoa for care locally, which would be symptom-based.”

A recommended regime to be done in Samoa is then set out for Lucky. One that is based on “what may be accessible in Samoa”, and one with “low enough intensity to be tolerated in Samoa where medical supports are not as readily available”.

Faaoo Papu is here in Samoa. It was her husband who travelled to Auckland in May with Lucky.  She is desperate to have her son remain in New Zealand, and for a chance to undergo any treatment that is available. She is simply not ready to have her husband and son return to Samoa, where nothing can be done, but wait for Lucky to die.

Faaoo is disappointed at the time it has taken to have Lucky diagnosed, and says she first presented to Motootua National Hospital in October. They were told to bring in Lucky’s passport, and prepare to be taken to American Samoa for a scan. She says numerous follow-ups fell on deaf ears, and by the end of 2021, noone had contacted them.

In January 2022, Lucky had abdominal pain again. They came to Motootua National Hospital where, according to Lucky’s mom, they were given a prescription and sent home. After a few weeks, they were back in hospital again. This time, they stayed for a whole month. It would be two more visits to the hospital, and two more months, before Lucky was finally able to travel to New Zealand on the 22nd May, said Faaoo.

Today, the 40-year-old mother says she asks herself, would the diagnosis been different if Lucky was taken to New Zealand in 2021 instead of months later? Faaoo says the whole time they were in and out of hospital, noone ever said the word “tumour” to them. She says they only saw the word in a medical report, when Lucky was finally cleared to travel to New Zealand.

Faaoo Papu says she has not been able to see the Minister of Health, and it is only the first secretary that she has been able to speak with.

According to Faaoo, a meeting was set up with the Minister last week, however, when their family arrived, it was only the secretary available. She said the first secretary of the Minister told her that it was unreasonable for them to expect the Government to pay for her son’s one treatment, when this could be utilised for the many other patients needing help.

With nowhere else to turn, Faaoo Papu is calling for public support. “There is no way for our family to raise $250,000 New Zealand dollars,” she cries, “but we so desperately want Lucky to have the operation in New Zealand.”

“If this was the Minister’s son, or his grandson,” says Faoo, “what would they do?,” she asks. “Would they bring him back to Samoa and just wait, and do nothing?”

The diagnosis is attached below. It is news that no parent wants to hear or read in a medical report about their child’s condition. It describes the risks, but as Faaoo points out, “even if it’s 30% chance, we still want to take it and try to save our son’s life.”

Samoa Global News was unable to secure an interview with the Minister or his first secretary after several attempts last week. 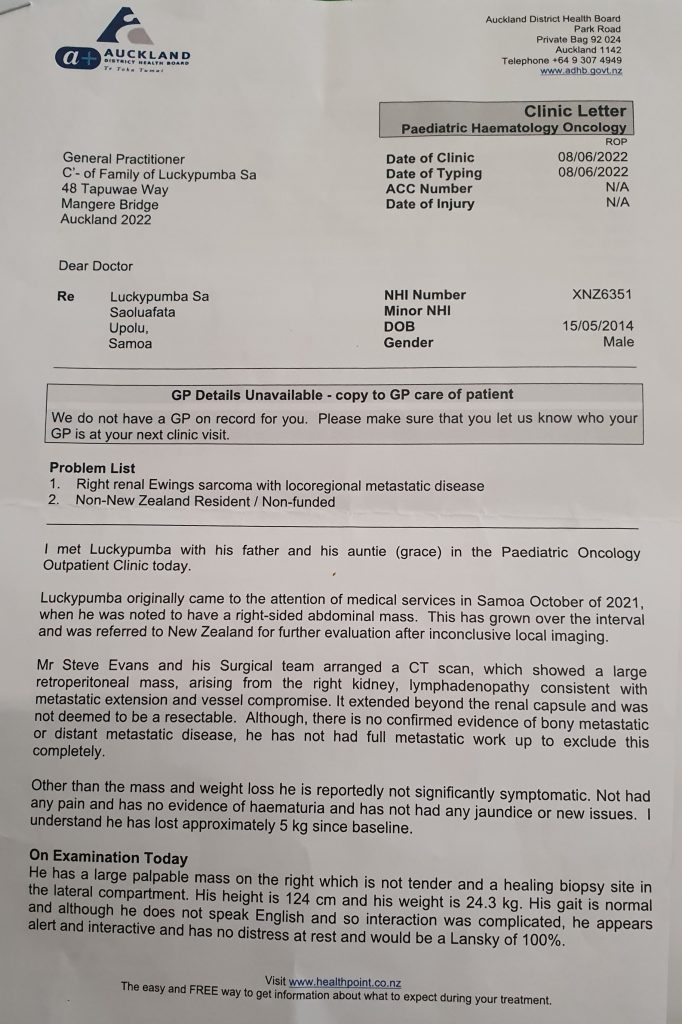 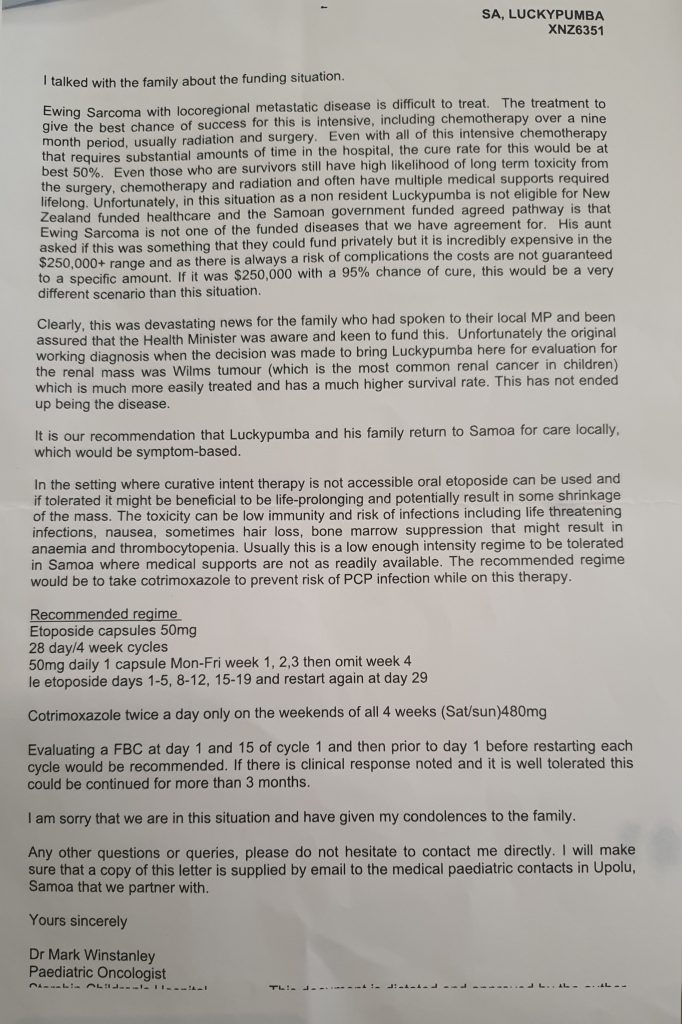