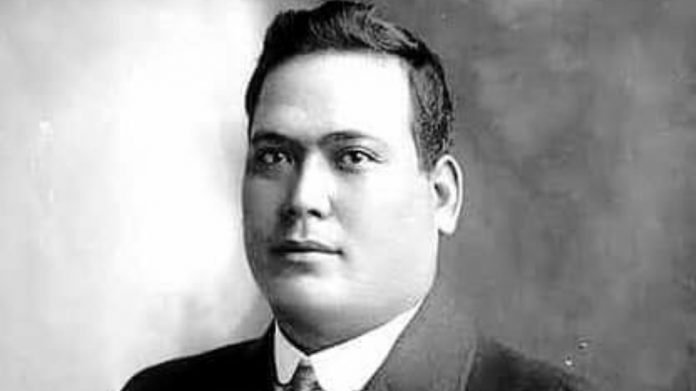 Nelson was born on 24 February 1883 in Safune on the island of Savai’i to Swedish trader August Nelson and his Samoan wife, Sinagogo Tugaga, whose family had links to the Sa Tupua, a prominent chiefly family.

His name Ta’isi is a matai chief title from his mother’s family from the Savai’i village of Asau. Nelson grew up in the family’s home village of Faleolo until the age of eight, when he was sent to the Marist Brothers School in Apia. He left the school at the age of thirteen and became an apprentice at the DH & PG firm. He worked at DH & PH for four years, during which time he founded Samoa’s first brass band.

After leaving DH & PG, Nelson returned to Savai’i and took over his father’s business. He expanded his father’s copra trading business throughout the islands, and by the time he was thirty five, Nelson was an established member of the Apia business community. He was influential in both the Samoan and European communities.

Under German rule the colonial administrators treated Nelson as an equal, but after New Zealand seized control in 1914, Nelson was excluded and alienated by the new government. Despite being elected to the Legislative Council in 1924, he could do little as he and the other elected members were constantly overruled by the more numerous government appointees. This treatment turned Nelson into one of the major forces in the Samoan independence movement, known as the Mau.

In May 1927 Nelson founded a newspaper, the Samoa Guardian, to support its claims. In response to his growing public dissent, the New Zealand administration tried to brand Nelson as unscrupulous and a trouble maker. The colonial administration’s desperation to silence Nelson led them to exile him in January 1928, along with two other part-European members of the Mau. During his five years of exile, Nelson took his protests as far as the League of Nations in Geneva.

Six months after his return to Samoa, Nelson was sentenced to ten additional years in exile as well as eight months imprisonment in New Zealand. This was cut short in 1936, after Labour won the New Zealand general election in 1935. He returned to Samoa, and helped in the signing of the co-operation agreement between Samoan leaders and the New Zealand administration. He was subsequently elected to the Legislative Council in 1938 and re-elected in 1941.

Nelson died in 1944, and it was not until 1962 that his dream of Samoan independence was realised.

Malienafau was the first Pacific Island graduate of the University of Auckland, graduating with a law degree in 1936. Malienafau’s granddaughter Maliena is the wife of Samoan All Black Laauli Michael Jones.

The Nelson Memorial Public Library was donated to the Samoan people by the Nelson Family in Ta’isi’s memory, as was the town clock.

His other grandson Misa Telefoni Retzlaff (Hermann Theodor Retzlaff) was in parliament from 1988 to 2010, and the Deputy Prime Minister of Samoa from 2000 to 2010.

Nelson’s grandson Tuatagaloa Joe Annandale is a community leader in Samoa who continues his district development work through the Poutasi Trust.