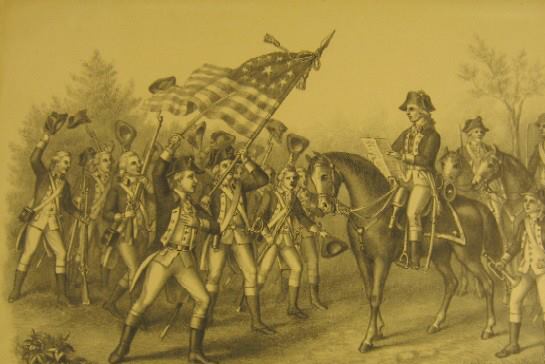 On the evening of July 9, 1776, thousands of Continental soldiers who had come from Boston to defend New York City from the British marched to the parade grounds in Lower Manhattan. General George Washington had ordered them to assemble promptly at six o’clock to hear a declaration approved by the Continental Congress calling for American independence from Great Britain.

Washington, like many others in the army, had been waiting for this declaration for some time. He had grown impatient with representatives who hoped for reconciliation with the mother country. To those who believed peace commissioners were on their way to the colonies to effect this reconciliation, Washington responded that the only people heading to the colonies were Hessian mercenaries. Even as his men waited to hear the proclamation read aloud to them, Washington knew that thousands of Hessians and even more redcoats were landing on Staten Island, preparing for an attack on New York.

Hancock explained that Congress had struggled with American independence for some time, and even after making this momentous decision, many members were worried about its consequences. He concluded that Americans would have to rely on the “Being who controls both Causes and Events to bring about his own determination,” a sentiment which Washington shared.1 For the commander-in-chief, who needed to lead his untrained army against Great Britain, the decision for independence came as welcome news, especially since his men would now fight not merely in defense of their colonies but for the birth of a new nation.

As Washington’s soldiers stood ready for the brigadiers and colonels of their regiments to read the Declaration of Independence, they first heard words written by their commander. Washington explained that Congress had “dissolved the connection” between “this country” and Great Britain and declared the “United Colonies of North America” to be “free and independent states.”2

Next came Jefferson’s stirring words explaining “…that all men were created equal and endowed by their Creator with the inalienable Rights of Life, Liberty, and the pursuit of Happiness…” Since King George III had trampled on these rights, as Jefferson argued in a long list of complaints against him, the people of the United States of America had the right to break the political bands that tied them to Great Britain and form a new government where the people would rule themselves. The words were so moving that citizens who had heard the declaration raced down Broadway toward a large statue of King George III. They toppled and decapitated it, later melting down the body for bullets that would be much needed in the coming battles to defend New York and the new nation that lay beyond it.