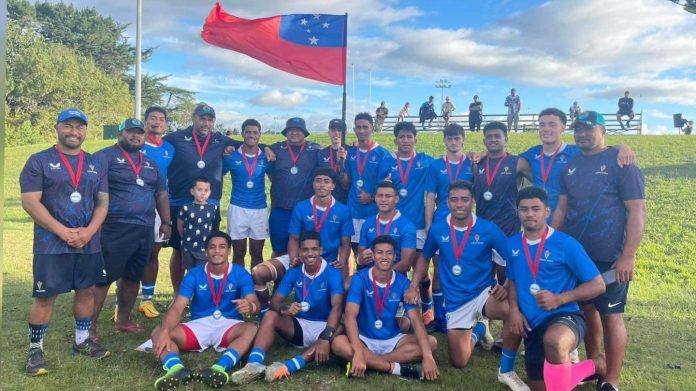 Two members of the team joined the squad in New Zealand, both from Mt Albert Grammar in Auckland.

The side were red hot all tournament easing past everyone they came up against, until they faced the New Zealand school boys team in the final.

Day 2 is never the same as the first day and in rugby 7s the ball can bounce either way and anything can happen.

Not for the Tama Samoa who charged into the second day just as dominant as they had been on Day 1.

In their quarterfinal match Samoa thrashed Niue 50-5 giving their Pacific neighbours no room to breath for the full 14 minutes.

Tama Samoa faced off against Asia Dragons and found themselves down 10-0 during the first half.

Despite having no ball the entire match, it only took Samoa one opportunity with the ball to score their first try of the match.

Malakesi Puna had been on fire all weekend long and scored a crucial try for Tama Samoa before the halftime hooter of the semifinals.

Puna, from his own try line, put on a giant right foot step to put his opposition in no man’s land before streaming away to score an 80-meter try.

The Asia Dragons led 10-7 at halftime but it was a lead that would soon disappear in the second half. Samoa came back onto the field and scored 20 unanswered points to earn their Grand Final spot against New Zealand.

New Zealand showed too much class for Samoa, using their size advantage to outmuscle the Tama Samoa.

Samoa was a little hard done by to not have more players in the tournament’s Top 7. Samoa’s Captain, Labanta Stowers, showed leadership in the forwards over the two day tournament and led his side all the way to the final.

Making the final and securing second place in the World Schools 7s is a great achievement for the Tama Samoa on their first outing to the tournament. The side was coached by Tama Uli’s Matamua Junior Salima, also the full time Savaii Development Officer with Lakapi Samoa.

This was the first time since the competition started in 2016 that a team has been featured from among local school boys, and yet, they managed to make the Grand Final.

It is an achievement Tama Samoa players and management can be proud of.