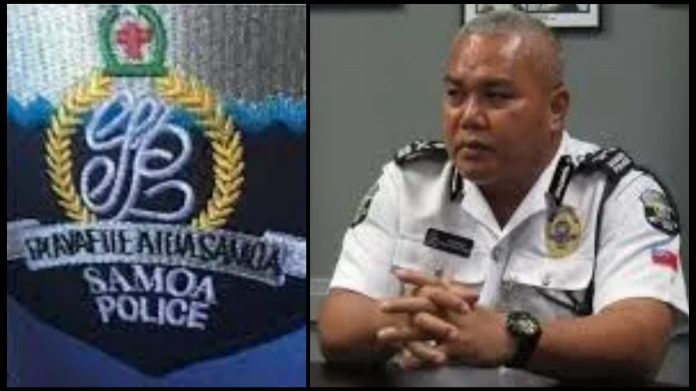 Samoa’s newly appointed Commissioner of Police and Prisons says he will focus on three main priority areas, in order to strengthen the core functions and service delivery of the Ministry in its crucial role to keep Samoa safe.

After 24 years in the service, Auapaau Logoitino Filipo was last week appointed by Cabinet from amongst seven applicants to lead the Ministry of Police, Prisons and Corrections Services (MPPCS) for the next three years. The Ministry has been under the leadership of Samoa’s three Deputy Police Commissioners on a rotational basis, since former PC Su’a Fuiavailiili Egon Keil resigned in August last year.

In an interview with Samoa Global News, Police Commissioner Auapaau says he aims to work more closely with Village Councils, set up an independent board to handle investigations into police conduct, and put systems in place to ensure improved police response times and general service delivery to members of the public.

“I think it’s important for the Ministry to strengthen its relationship with Alii and Faipule – to work in collaboration with all Village Councils across Samoa,” said Auapaau. “We have to recognise the important role they play within communities on a daily basis, and find ways for law enforcement to work effectively with them.”

“The safety and security of Samoa is a shared goal for us and Village Councils, and we need to formalise how we can work better together,” he adds.

Secondly, Auapaau says he wants to change the way the Ministry handles complaints against the conduct of police officers, through internal investigations by the Professional Standards Unit (PSU).

Thirdly the Commissioner says that in order to improve service delivery, the Ministry will have to lift their response time to public calls for help.

“I would like to improve our timely response to the public and that includes our customer service and ability to better assess situations during call-outs,” said Auapaau.

“We can maintain the peace and security of Samoa within the boundaries of the Law, and still be customer focused in our response,” the Police Commissioner adds.

Auapaau says he would like to see the extension of MPPCS services to rural areas and newly developed settlements.

“There is a need to set up a few more outposts, for example, in the Anoamaa district and also look at newly developed areas such as Nuu-Fou”.

The Leifiifi Intermediate and Samoa College alumni says he joined the police force to make a difference in people’s lives, “especially victims of crime.”

When asked, Auapaau says one of his most challenging cases has been the investigation of a foreign national for money laundering.

“It was back in 2009, the first of its kind in Samoa, during the early days of the TCU (Transnational Crime Unit)”.

Auapaau says he is grateful to God for this calling as Police Commissioner, a role that currently oversees both Police and Prisons in Samoa.

“I thank the Cabinet and Government of Samoa for the trust they have given me to lead the Ministry of Police, Prisons and Corrections Services. It is not an opportunity that I take lightly, and I look forward to continue our close working relationship with DC Papalii Monalisa and DC Afamasaga, as well as Assistant Commissioners and the leadership.”

“My calling is a blessing from God and I thank my church minister, Reverend Amosa Reupena and my EFKS church family at Vaimoso for their prayers.”

The father of six says he has been inundated with messages of support from friends and family. “I also want to acknowledge my families here in Samoa and overseas for their prayers and support.”

Aupaau says his career has been well supported throughout the years by his wife, and their six children. “I especially want to thank my wife and our kids for their unending support and understanding of the role, that sometimes means I’m not home with them when I want to be.”