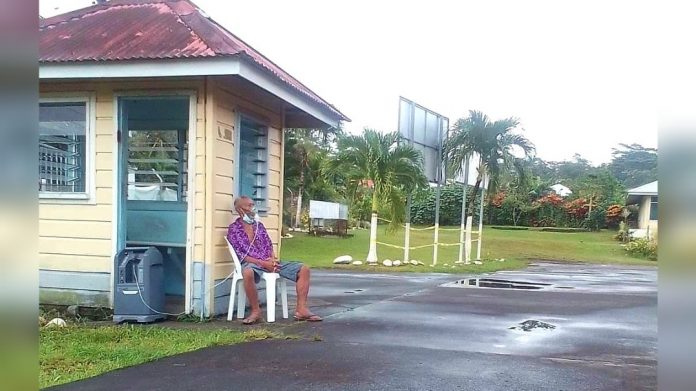 Sunday 27 March 2022, Apia Samoa. A 76 year old covid-19 positive grandfather from Siumu who had visited the nearby district hospital with difficulty breathing on Sunday afternoon, was given oxygen and made to sit outside the security hut near the roadside.

Mano Tupuola Sekono Fetoai tested positive at Poutasi District Hospital on Tuesday last week, and was sent home to self-isolate. Speaking to Samoa Global News, his daughter and main caretaker, Mrs Sia Osa, said it was hard to see her father sitting outside the security house, especially in the drizzling rain.

“He was complaining of a tight chest, and said he couldn’t breathe, so we rushed him to the hospital.. But when we got there, they said we couldn’t enter the hospital grounds because we were both positive.. this was at around 5pm.”

Sia said the medical staff at Poutasi tested her when they arrived, and unsurprisingly confirmed she was positive. “I don’t have any symptoms, just my Dad we were worried about, but of course I was positive because I’ve been caring for him since we were sent home with covid last Tuesday,” she said.

“They gave him oxygen, but he was sitting outside in the cold wet weather and I was worried it would make him worse. Once he’d had two rounds of the oxygen mask, he felt better and we came home,” said Sia.

Sia posted about their experience on social media, which has attracted a lot of public interest and comment. The Poutasi District Hospital was contacted for a response, however, a healthcare worker who answered the phone said she was unable to comment, as there were many patients to attend to.

Sia’s mother passed some years ago. She and her husband take care of her father. She stays home as a full time mom to look after children and is the primary caregiver for her elderly father. She says her father will turn 77 this December. “E atoa ia Tesema lona 77”.

As if they had a sense of such predicaments, Samoa’s National Human Rights Institute (NHRI) had published an information paper on “non-discrimination and covid-19” on Saturday evening.

In the publication, the NHRI identifies vulnerable groups as including persons with disabilities, low income earning families, women and girls, elderly, those with underlying health conditions, prisoners and persons with diverse gender identities.