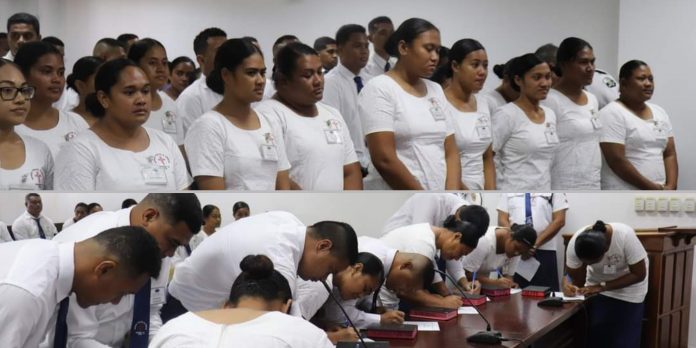 After 17 long and hard weeks of training and assessments, 65 new recruit members were sworn into the Samoa Police and Prisons service on Monday morning.

Of the 65 new recruits, 16 are Correction Officers with Prisons. Six are already employed members of the Tanumalala Prison. The newly recuited 16 takes the total number of Prison graduates to 22 for this year 2022.

For Police, a total of 41 new members were sworn in with two already employed members of the Maritime Wing. This takes the tally up to 43 Police Officers to graduate in this year’s recruitment class.

Her Honour Senior Judge Talasa Atoa Sa’aga conducted the swearing in at the Court House Monday morning 28 November in the presence of the Samoa, Police, Prisons and Correction Services’ Executive Management.

She told the new recruits to use the Ministry’s code of conduct as a guiding light to their profession.

“A reflection of discipline and responsibility, to know your calling when you walk out of this court room,” said Senior Judge Talasa Atoa Sa’aga.

“I encourage you and thank all these men and women for taking on this enormous and most important responsibility.”

The ceremony will be held at the Tui Atua Tupua Tamasese Efi Building (TATTE) at 11am. The Special keynote address will be done by Her Honourable Prime Minister, Fiame Naomi Mata’afa.