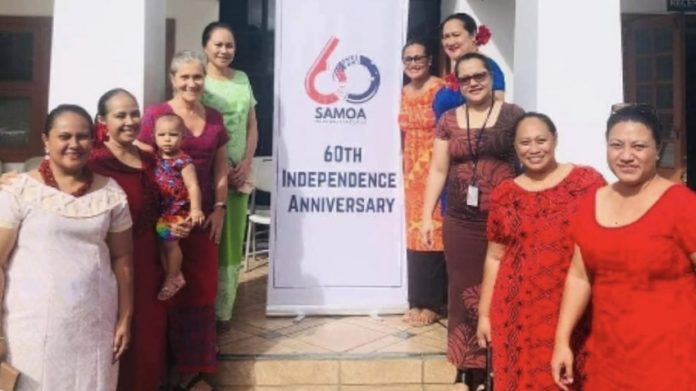 The Samoan community gathered at the Samoa High Commission in Suva to take part and witness the 60th independence anniversary flag raising ceremony. It was the first time ever in the Samoa-Fiji relations, that a flag raising had been conducted in Suva, at the ney established High Commission.

Master of Ceremony Taito Louis Lene welcomed guests and members of the Samoan Community to the new Samoa High Commission chancery in Suva.

The opening sermon was conducted by Rev. Siu Vaifale of the Congregational Christion Church of Samoa (CCCS) in Suva. The reverand reflected on the struggles of Samoa’s forefathers who had paved the way for independence.

This was followed by the official raising of the flag by Dr Tauta Perise Maua McGraig, one of the senior members of the Samoan community who has made Suva her permanent home.

It was an emotional moment for all Samoans in attendance especially while singing our “Vii o le Saolotoga” national anthem.

Samoa’s High Commissioner to Fiji Aliioaiga Feturi Elisaia provided remarks highlighting the significance of the flag raising ceremony taking place for the first time at Samoa’s own office which coincided with the 60th independence anniversary. He also shared some of Samoa’s major milestone achievements in its 60 year journey as an independent nation.

At the conclusion of the formalities, the High Commission hosted a morning tea reception inside the chancery.

Over 50 members of the Samoan community including some students from USP, FNU and PTC attended.

For the Samoan community in Suva, it was the first major community event, although small in scale, since Fiji had gone into lockdown back in 2021. It was also an opportunity for many to catch up for a talanoa and to visit the new High Commission chancery, soon to be officially opened.