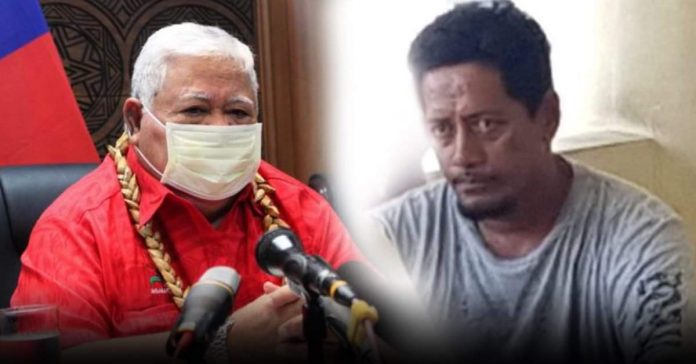 Taualai Leliloa, 39, and father of four from Magiagi and Laulii pleaded guilty to plotting the assassination of Tuilaepa when the matter was first called in September 2019.

In handing down her decision, Supreme Court Justice Tologata Tafaoimalo highlighted the seriousness of the offense.

“A conspiracy to murder the Prime Minister of any democratic country of the world is an attack on democracy itself”, said Justice Tologata Tafaoimalo.

‘It cannot and should not be taken lightly”.

According to the Police Summary of Facts accepted by Mr Leiloa, he was provided with a weapon, a vehicle and money to carry out the assassination. He was also given directions to locations where the Pime Minister would be.

According to the defendant, most of his instructions were given by Mr. Tala Pauga via messenger from Australia.

According to Mr Leiloa, he was first contacted by Australian-Samoan, Mr Tala Pauga, in May 2019 via messenger. Mr Leiloa says Pauga then called him via video chat and relayed that he wished to have the Prime Minister killed, and asked the defendant if he had the courage to carry out the proposed assassination.

He said he knew and identified Tala from his videos posted on social media, and also from news reports for the incident where Pauga had thrown a pig’s head towards the Prime Minister during a public event in Australia.

According to Taualai Leiloa, the first plan was to assassinate the Prime Minister at the Opening of the Pacific Games in July 2019. Failing this, he was told to go to the Catholic Church at Siusega to wait for the Prime Minister when he attended early morning Sunday mass. The third location he was sent to by Pauga was the fish market, on Father’s Sunday in August 2019.

The defendant said he kept delaying the assassination by lying to his co-conspirators that the Prime Minister was not present.

The defendant then headed home, however, he says that around noon on the same day, Pauga called the defendant again on messenger and ordered him to go to Malololelei and kill the Police Commissioner.

He told probation that at the suggestion of Mr Pauga to assassinate the Prime Minister, he received funds including various amounts of money to purchase a gun.

The defendant says he had no intention of carrying out the assassination and used the money for various family faalavelave. He expressed deep remorse and regret to Probation and says he takes full responsibility for his actions. He says he only did it to obtain money.

Justice Tologata Tafaoimalo took a starting point of 10 years and deducted 3 for his early guilty plea. Six months each were deducted for the reconciliation with the Prime Minister, his cooperation with authorities, his personal circumstances and the remorse shown by the defendant.

The Supreme Court has set an August 2020 trial date for the other alleged conspirators.

The Office of the Attorney General has also begun the process of extradition for Mr Tala Pauga from Australia.