Lieutenant Governor Talauega Eleasalo Vaalele Ale has announced one passenger who arrived into American Samoa on Monday 13 September has tested positive for Covid-19 and has now been moved from quarantine into managed isolation.

A commercial flight from Honolulu flew in 217 passengers including those under the Talofa Pass, an online system of applying for travel into the Territory that sets out mandated pre-departure requirements.

American Samoa’s Governor Lemanu Peleti Mauga was one of the passengers on the 13 September commercial flight, and is currently under the mandated 10 days of quarantine.

The Lieutenant Governor in a live broadcast with American Samoa’s special response taskforce, gave his assurance that American Samoa is prepared, and said there was no need to panic.

Lt. Gov. Talauega called for “business as usual” since the passenger is in isolation, adding that he was confident with the measures in place to contain the virus so citizens “can continue to live a normal life”.

The former Attorney General also reminded that this was not American Samoa’s first case in isolation, and as in previous cases, the community is well protected.

Taskforce officials confirmed the passenger is a returning resident who had been fully vaccinated before leaving American Samoa.

Dr Elizabeth Lauvao said it is important to note that despite being fully vaccinated and fulfilling all pre-departure tests, an individual can still contract the virus.

Dr Lauvao advised the public to support national efforts to combat the global pandemic by getting fully vaccinated.

“We have not reached an acceptable level of vaccinations yet to be fully protected from coronavirus.. so we urge all eligible persons not yet vaccinated, to please come in and get vaccinated..”

“You need to be tested 10 days before departure as well as 5 days and then again at 2 days”.

Dr Aifili said contact tracing was immediately activated for local officials who may have been close to the passenger, and they would also be contact tracing movements pre-departure.

He confirmed all local first responders identified under contact tracing are now being closely monitored in quarantine and will be regularly tested.

Dr Aifili also gave his assurance that protocols in place are working well as evident by the positive case being identified while the passenger was in quarantine, so there is little chance of spreading to the community.

American Samoa media asked about the gender of the passenger, however, Lieutenant Governor Talauega stressed the importance of maintaining the confidentiality of patients.

“The returning passenger is a citizen of American Samoa.. and we ask for your prayers over them”, he said.

Talaleuga confirmed flights into the Territory from Samoa and Tonga scheduled for today and over the weekend, are indefinitely on hold.

“I do apologise to all those affected. There are protocols that become immediately activated once a positive case is confirmed, and my decision to cancel flights for the time being is based on freeing up the limited locations we have for quarantine and isolation,” said LT Talauega.

Asked what his advice was to those who may looking to travel, Lieutenant Governor Talauega said the safest place in the world is American Samoa and Samoa.

“Incase you’ve forgotten we’re in a global pandemic.. and if you’re wanting to go on vacation or travel for fun.. I strongly advise against it..  unless you have to travel, don’t do it..”

American Samoa has this week passed the 60% mark of fully vaccinating its eligible population. 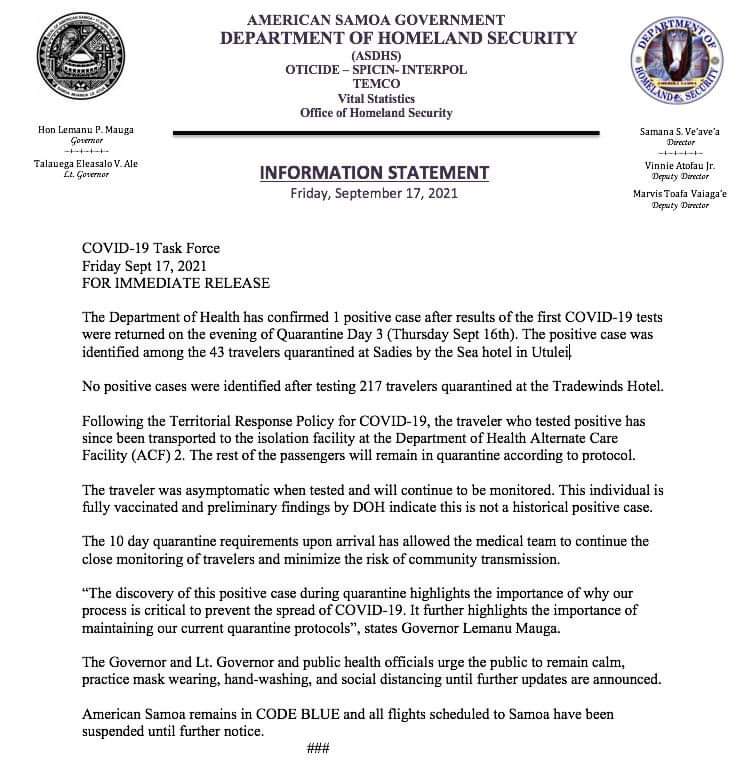