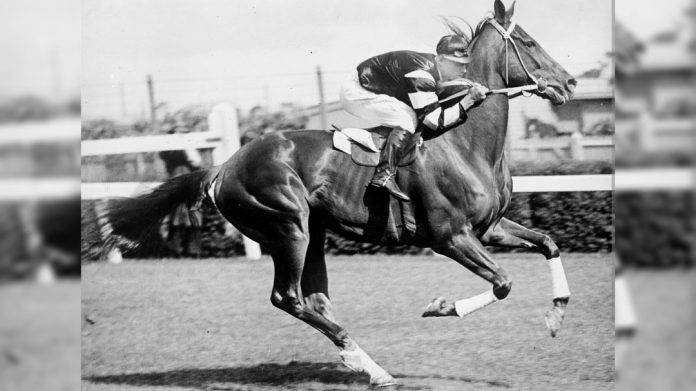 Ridden by Jimmy Pike, the New Zealand-bred and Australian-owned wonder-horse beat Second Wind by two lengths to claim one of his greatest victories of the “race that stops the nation”.

The Melbourne Cup is the pinnacle of thoroughbred racing in Australasia and is widely regarded as the most prestigious two-mile (3200 metres) handicap in the world.

Having finished third in 1929, Phar Lap started as the shortest-priced favourite in the history of the race at odds of 8–11 (a return of £1.73 for each £1 bet). Amazingly, he won on all four days of the Flemington Spring Carnival.

He followed up his 1930 victory by running eighth in the Cup in 1931 under a crushing 68 kg, the heaviest weight ever carried in the race.

Other horses have won multiple Melbourne Cups, but few have eclipsed Phar Lap in Cup folklore.

Standing at an impressive 17 hands (1.73 m), he combined stamina with speed.

‘Big Red’, as he was known, has been the centre of a trans-Tasman tug-of-war over bragging rights. Born in 1926 at Alexander Roberts’ Seadown Stud, near Timaru, he raced in Australia, where he became a crowd favourite during the Great Depression.

The first Melbourne Cup was run in 1861.

In Samoa the Rotary Club of Apia have made the annual event its main fundraising activity of the year, with lots of fun and an opportunity for businesses and individuals to support community projects.