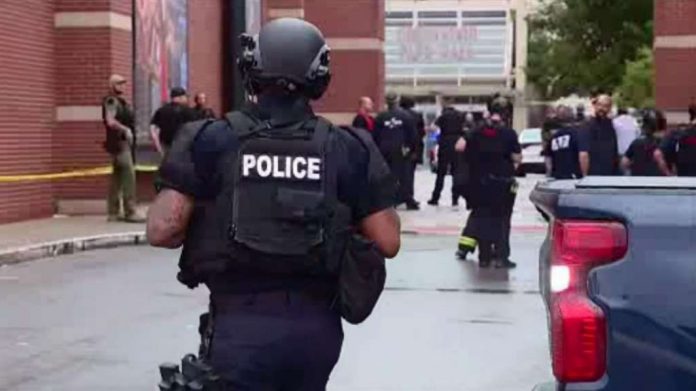 Sources: NYTimes, Indianapolis Star.  Three people were killed in a mass shooting at a mall in Greenwood, Indiana that ended when a 22-year-old armed bystander fatally shot the gunman, police said.

Two others were wounded, including a 12-year-old girl who sustained a minor injury, the Indianapolis Star reported.

The shooting began when a man with a rifle and several magazines of ammunition entered the food court and started firing.

Chief Jim Ison of the Greenwood Police Department did not indicate a motive for the shooting and did not identify the gunman during a press conference with local media.

Mr. Ison said the local emergency call center began to receive calls about the shooting around 6 p.m. He said the threat ended when an armed passer-by, who had a handgun, stopped the gunman.

“The real hero of the day is the citizen that was lawfully carrying a firearm in that food court and was able to stop the shooter almost as soon as he began,” said Police Chief Ison.

He added that investigators and other personnel would not process the crime scene at the mall until a state bomb squad could determine whether a “suspicious” backpack that was left in a mall bathroom was dangerous.

The police issued a public call on social media – they were seeking witnesses to the shooting, which took place about 15 miles south of Indianapolis.

The Indianapolis Metropolitan Police Department said on Twitter that it was helping the local authorities and urged people to avoid the area.

Indiana has some of the most relaxed gun laws in the US. This month it scrapped the need for people carrying a handgun to have a permit – even if the weapon is concealed.

This latest shooting follows similar attacks at a school in Uvalde, Texas in May 2022 where 19 children and two teachers were killed when an 18-year-old gunman entered the school and fired more than 100 rounds, injuring another 17, mostly children.

In an Independence Day parade  in Chicago on July 4th, six were killed and dozens more were injure.

The three people shot dead in Indiana are among 136 people killed in firearm violence nationwide in the last 72 hours, according to the Gun Violence Archive.