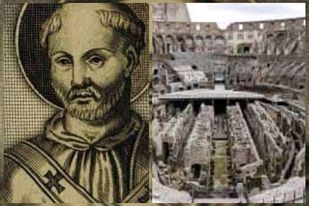 Pope Pontian, or Pontianus, was a victim of the persecutions of Emperor Maximinus Thrax. In 235 he was sent to the mines of Sardinia, where he was no doubt poorly treated. Separated from his flock, and realizing he was unlikely to survive the ordeal, Pontian turned over the responsibility of leading all Christians to St. Anterus on September 28, 235. This made him the first pope in history to abdicate. He died not long after; the exact date and manner of his death are unknown.

He resigned to make the election of a new pope possible. When Pontian resigned on 28 September 235, he was the first pope to do so. It allowed an orderly transition in the Church of Rome and so ended a schism that had existed in the Church for eighteen years. Some accounts say he was beaten to death only weeks after his arrival on Sardinia.

A little more is known of Pontian than his predecessors, apparently from a lost papal chronicle that was available to the compiler of the Liberian Catalogue of the bishops of Rome, written in the 4th century. The Liber Pontificalis states that he was a Roman citizen and that his father’s name was Calpurnius. Early church historian Eusebius wrote that his pontificate lasted six years.

Pontian’s pontificate was initially relatively peaceful under the reign of the tolerant Roman Emperor Severus Alexander. He presided over the Roman synod which approved Origen’s expulsion and deposition by Pope Demetrius I of Alexandria in 230 or 231.

According to Eusebius, the next emperor, Maximinus, overturned his predecessor’s policy of tolerance towards Christianity. Both Pope Pontian and the Antipope Hippolytus of Rome were arrested and exiled to labor in the mines of Sardinia, generally regarded as a death sentence.