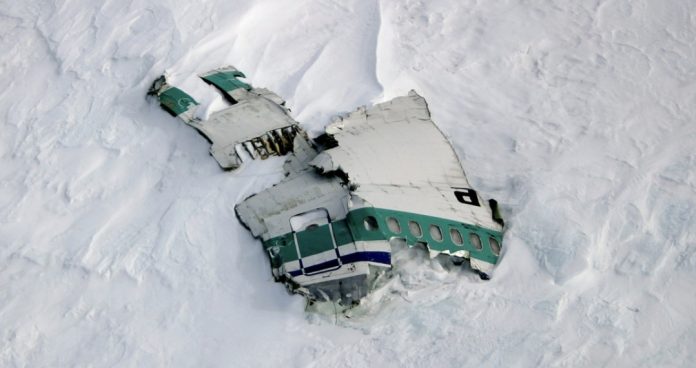 On the morning of 28 November 1979, Air New Zealand Flight TE901 left Mangere airport, Auckland, for an 11-hour return sightseeing flight to Antarctica. At 12.49 p.m. (New Zealand Standard Time), the aircraft crashed into the lower slopes of Mt Erebus, killing all 257 passengers and 20 crew.

Mount Erebus is an active volcano, the second-highest in Antarctica after Mount Sidley.It is the sixth-highest ultra mountain on the continent with a summit elevation of 3,794 metres (12,448 ft).

Air New Zealand had begun operating sightseeing flights from Auckland to Antarctica in 1977. Passengers would enjoy low-level views of the Ross Dependency before the aircraft returned to Auckland via Christchurch. The flights had always operated smoothly and were popular with both Kiwis and tourists.

When TE901 failed to arrive at Christchurch on schedule, authorities feared the worst. It was clear that the plane, if still airborne, would soon run out of fuel. Search and rescue operations began in Antarctica, but it was not until midnight (NZST) that aircraft spotted wreckage on the lower slopes of Mt Erebus. Confirmation that there were no survivors came the next day.

More than 60 professionals and volunteers recovered bodies and inspected the wreckage to determine the cause of the disaster. The operations took several weeks and against heavy odds, they retrieved all the bodies and eventually 214 were identified. An air accident investigation began, using information from the aircraft’s flight recorders and other sources.

Debate raged over who was at fault for the accident. The chief inspector of air accidents attributed the disaster to pilot error, but Justice Peter Mahon’s Royal Commission of Inquiry placed the blame on Air New Zealand and its systems. There were clearly a number of contributing factors, but which was the most significant, and whether the pilots or the airline were ultimately responsible, remains a matter of intense debate.

The Erebus disaster has been remembered in many ways. Memorial services for the victims were held in the immediate aftermath of the crash. These have continued, especially on significant anniversaries. In 2019 the government announced that a national Erebus memorial would be erected in Auckland’s Parnell Rose Gardens.

At an event to mark the 40th anniversary of the disaster, Prime Minister Jacinda Ardern and the chair of Air New Zealand delivered an apology.